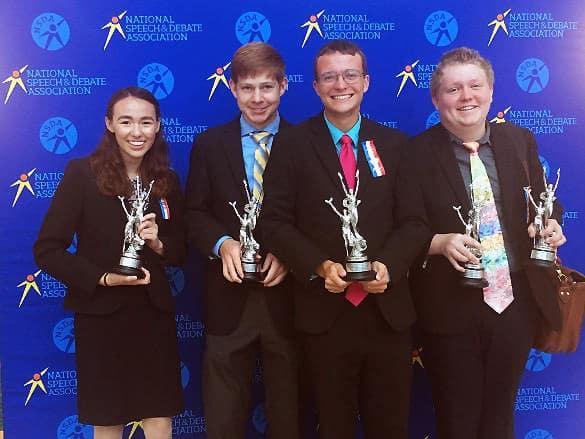 Members of the New Mexico Gold World Schools Debate team comprised of LAHS Hilltakers, from left, Sonyia Williams, Sam Menefee, Donald Poston and Antonio Dowdy. Courtesy photo
LAPS News:
The Los Alamos High School Hilltalkers Speech and Debate team returned from the National Speech and Debate Association National Tournament in Fort Lauderdale, Fla., with trophies and many great memories.
The New Mexico Gold World Schools Debate team, comprised of Hilltalkers Antonio Dowdy, Sam Menefee, Donald Poston and Sonyia Williams, advanced to the quarterfinal round of World Schools Debate before losing to the East Texas White team.
The quarterfinals finish for New Mexico Gold was one of the strongest finishes for an all-Los Alamos team since the mid-1990s. The Hilltalkers World Schools team made it to quarterfinals from a competitive field of 179 World Schools Debate teams. Additionally, Antonio Dowdy was honored as the 13th top speaker in World Schools Debate.
According to the National Speech and Debate Association, “The National Debate & Speech Tournament has been held across the country since 1931, and today is the largest academic competition in the world. Each year, more than 3,500 high school students compete in a week-long competition to determine the most prestigious title in high school academics: national champion. The student competitors represent the best and brightest young people across the United States and the globe.”
Twelve Hilltalkers, including the four World Schools debaters, traveled to Fort Lauderdale to compete June 18-23. All of the Hilltalkers qualified for the tournament in a competitive double elimination district tournament held in New Mexico in March. All of the Hilltalkers who traveled to compete at the National Tournament are ranked in the top 5 percent of speakers and debaters in the United States. The following Hilltalkers represented Los Alamos High School and New Mexico at the tournament in the following events: Malea Joyce, Original Oratory; Emily Holmes and Neha Sadasivan, Duo Interpretation; Xavier McTeigue and Leah Wolfsberg, Duo Interpretation; Nilesh Mukandan, United States Extemporaneous Speaking; Gopal Nadiga, Big Questions Debate; and Brandi Weiss, Informative Speaking.
Los Alamos Hilltalkers coach, Margo Batha, was also honored at the National Speech and Debate Association’s annual luncheon for District Leaders with a District Leader Commendation for her work in “providing the organizational and financial strength of the New Mexico District.” Los Alamos Middle School Hawktalkers coach, Sherri Bublitz, received valuable professional development as a member of the tabulation room staff for Big Questions debate.
To kick off the tournament Saturday, June 16, the Hilltalkers, their chaperones, and their coaches, attended a special event, “Powerful Voices. Meaningful Changes.”
Sponsored by the National Speech and Debate Association and Broward County Public Schools, the event offered competitors and coaches the opportunity to learn about the innovative speech and debate curriculum offered to all students in Broward County schools. They also learned about a special debate format, Solution Oriented Debate, which is easily implemented in all classrooms.
“As we begin to plan for the 2018-2019 speech and debate competition season, we are excited to continue our vertical teaming with the Los Alamos Middle School Hawktalkers,” Batha said. “Eleven of our twelve national qualifiers began their speech and debate careers as Hawktalkers and we have high hopes for the continuing success of both programs.” She continued, “We are extremely fortunate to have the strong support of Los Alamos Public Schools administration and school board. There is no doubt that without this strong support, we could not have such a strong program. We are excited to share with our colleagues the innovative Solutions Oriented Debate format.”
Both Bublitz and Batha expressed their gratitude to the local businesses that made the trip possible for the Hilltalkers: Stephanie and Marcel Remillieux of Fleur de Lys; Jennifer Martinez of Pampered Chef; Prashant Jain of Sirphey/Unquarked, and Tim Orcutt of Bliss Gift Emporium. According to Batha, “Each of these businesses went out of their way to support and fundraise for us during our May fundraising blitz. Without their support and the support of a number of generous donors, we would not have been able to travel to Fort Lauderdale.”
Right now, the Hilltalkers are busy planning for their upcoming competition year and hosting their own debate tournament Saturday, Sept. 23, at Los Alamos High School.
LOS ALAMOS