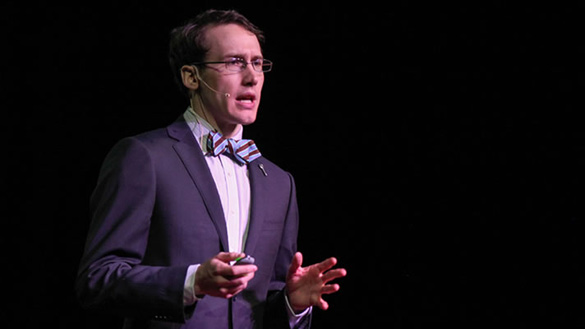 When Josh Willms graduated from Los Alamos High School in 2008, he was a devout Christian. He headed for Texas Tech University in Lubbock with the plan of becoming a physician and a missionary in Africa.

“My belief meant everything to me,” Willms said.

When his father, a pillar of his Los Alamos church lost his faith, it was a huge crisis for Willms.

“I’d try to talk to my dad, but he was so much smarter than me,” Willms said. “I wanted to level the playing field so I began learning everything I could in science and philosophy that had anything to do with whether or not God existed.”

Six years into the search, Willms is an MD/PhD student, with a BA in biology and a BS in classics.He auditioned to give a TED Talk about his own journey in search for a truth to believe in. The result is “What if Everyone Searched for Belief?” a TED Talk that describes his quest to learn about the belief systems of others as well as his own.

This description is presented in an attempt to get more people to search for the truth, inside their current belief system and outside it as well. To view the talk, click here.

“People default to cultural norms,” Willms said. “What are the chances that I’m saved because I was born in a Christian home? Not good.”

“Belief without evidence was deeply disturbing to me, but I thought if you weren’t a Christian you were going to Hell,” Willms remembered. “I cared deeply about my dad and my non-Christian friends, but when I discussed religion with them, I wasn’t listening. I only looked to poke holes in their reasoning.”

Willms also realized that the evidence he had been examining was only that favoring a Christian world-view.

“I decided on a new Golden Rule ─ give everyone’s argument the attention you would like them to give yours, and treat other’s beliefs as you want yours to be treated,” Willms said. He also decided to apply the “outsider rule.” This rule encourages using the same fairness in examining one’s own beliefs as those of others.

Willms spent a year learning about 35 world religions, from practitioners if possible. During his junior year in college, he had a crisis of faith “The evidence pointed me away from Christianity,” he said. “I lost a lot of close friends, but I wouldn’t sacrifice my intellectual integrity.”

But the search didn’t end there. Willms doubled his efforts. What does he believe now? He’s not saying. “Everyone should go on the journey and figure it out for themselves,” he said.

“Most people default to their own cultural norms, but I think all of us want to find truth,” Willms said. “All of us want answers that are emotionally and intellectually satisfying. Science and philosophy can inform each other.”

The search for belief benefits, not only the individual, but the world as a whole, Willms said, adding, “Even if no one changes their beliefs, understanding is a cross-cultural olive branch.”