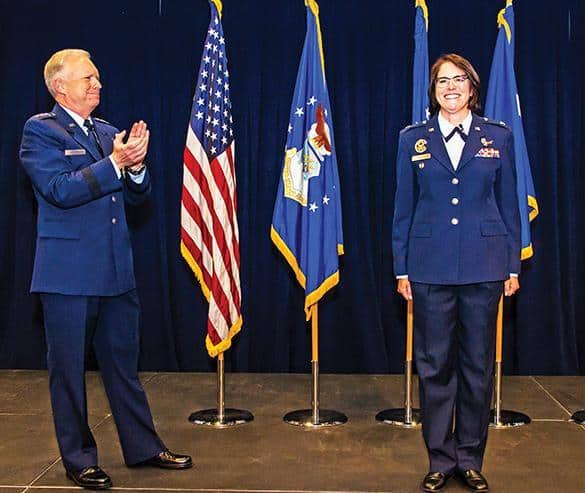 Los Alamos High School graduate Jody Merritt is promoted to Brigadier General in the U.S. Air Force Reserve during a special ceremony May 1 in California. Courtesy photo
By KIRSTEN LASKEY
Los Alamos Daily Post
kirsten@ladailypost.com
Jody (Guthals) Merritt, a 1985 graduate of Los Alamos High School, has had a career in the U.S. Air Force that spans 30 years.
She was promoted to Brigadier General in the Air Force Reserve during a special ceremony May 1 in California.
Merritt works as a mobilization assistant to the commander at the Space and Missile Systems Center, Air Force Space Command at the Los Angeles Air Force Base.
According to her biography, Merritt is responsible for assisting the Commander, Lieutenant General Thompson, who also serves as the Air Force Program Executive Officer for Space, in managing a $6 billion budget covering space systems research, development, acquisition, sustainment and the associated launch, command and control infrastructure.
Merritt explained that they buy or acquire space craft for the Air Force as well as provide ground support.
“Our organization is responsible for acquiring all those systems,” she said.
Her professional career in the Air Force is extensive, in fact Merritt was introduced to the military well before entering the Air Force. It began with the Naval Junior Reserve Officers Training Corps (NJROTC) at Los Alamos High School.
Merritt was one of the first Los Alamos high schoolers to participate in the program, which was initiated when she was a sophomore. Merritt said she completed the four-year program in three years. She described the program as “fantastic” and credits the program’s success to then Commander ‘Hoppy’ Hopkins and Chief Petty Officer Reed.
Merritt also had family members in the Air Force. Her brother is Col. Mick Guthals (Ret). He graduated from LAHS in 1977 and is a decorated Bronze Star veteran.
Her father Paul Guthals also was in the Army and later flew with the Air Force for Los Alamos National Laboratory while conducting atmospheric testing and bomb cloud sampling.
“I had exposure to the military, the Air Force and serving my nation during my formative years and it just seemed like a good fit for me,” Merritt said.
Merritt earned her bachelor’s of science degree from the U.S. Air Force Academy in Colorado Springs, Colo., in 1989 and then received her first master’s degree at St. Mary’s University in Texas in 1991. She earned her second master’s at George Washington University in 1997.
Her education also included working in the Air Force Intern Program for the Joint Staff at the Pentagon in 1997.
During her time in the Air Force Merritt has crisscrossed the U.S., serving at Brooks Air Force Base in Texas; Schriever Air Force Base in Colorado; Onizuka Air Force Base in California; the National Air Intelligence Center at Wright Peterson, Ohio; Vandenberg Air Force Base, Colorado; Peterson Air Force Base in Colorado and Silicon Valley where she worked for the Director of Integrated Air, Space, Cyberspace and Intelligence, Surveillance and Reconnaissance Operations.
Merritt said her experience in the Air Force has been valuable.
“I think probably the most valuable thing to me in the Air Force is the opportunities I have had to do amazing things in the service of the nation and to be in equal footing of my peers,” she said. “It has really added richness to my life.”
As a woman, Merritt said she has always been treated equal to her male counterparts and has had the chance to work with billion dollar systems as well as startup companies in Silicon Valley.
“All that richness makes me want to continue to serve,” she said.
The military has provided excellent opportunities for her education, Merritt said, and it has given her many great mentors. Though she said her earliest mentor and role model is Los Alamos resident Morris Pongratz.
As a reservist, Merritt also has a civilian career, too. She works for SAIC as a Chief Solutions Architect. She said the company “has a fantastic program for reservists and veterans that allows flexibility to do (my) Air Force job.”
Merritt said she has done numerous things in her civilian career from education and management to consulting, program management and systems engineering.
Earning her promotion in the Air Force has made her want to do more.
“Since then I’m definitely …. extending my leadership role in some of the initiatives we have here at the center,” Merritt said.
For those in high school right now who are interested in pursuing a career in the Air Force, Merritt offers a few pieces of advice. She said students should apply themselves in school, take science, technology, engineering and mathematics (STEM) classes and not be afraid to ask for mentoring.
“It’s been and continues to be a great career,” Merritt said. “Anyone interested in a career in the Air Force, I would advise them to chase that dream because for me it has been a great experience.” 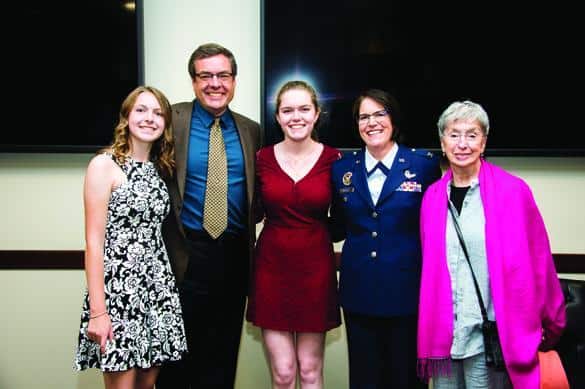 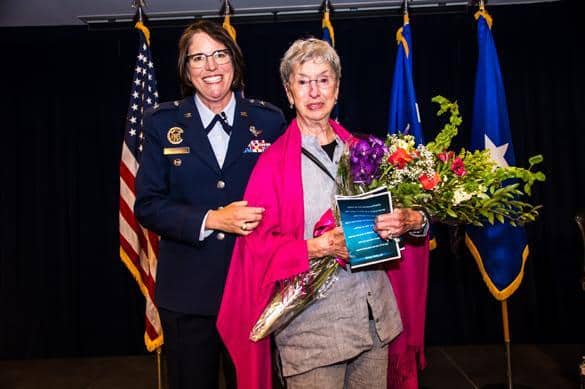