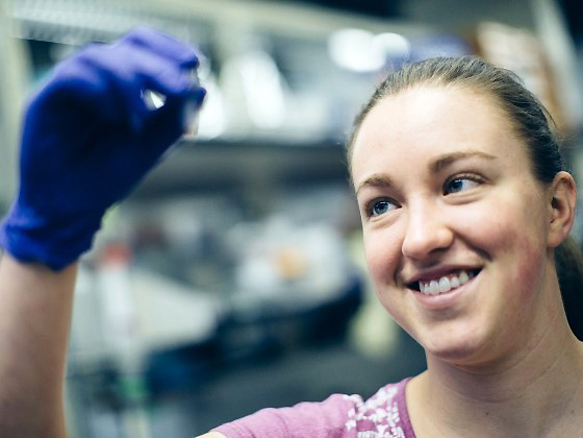 BOZEMAN — A Montana State University student who would like to contribute to renewable energy efforts throughout her career in research has received a prestigious Graduate Research Fellowship from the National Science Foundation.

Anna Scott, a senior and 2013 Los Alamos High School graduate who is studying chemistry in the MSU College of Letters and Science’s Department of Chemistry and Biochemistry, learned this spring that she received the fellowship, which will provide her a stipend of $34,000 a year for three years.

Scott, who is also a student in the MSU Honors College, will graduate from MSU in May. She plans to use the Graduate Research Fellowship to pursue a Ph.D. at the California Institute of Technology beginning this fall.

There, she plans to continue her research in bioinorganic chemistry, a field that examines the roles of metals in biology.

It’s a field that she has embraced since the second semester of her freshman year, when Scott began conducting research on enzymes in the laboratory of Joan Broderick, MSU Women in Science Distinguished Professor.

“Coming in I knew I wanted to do research – it’s kind of why I chose MSU – but I didn’t really know what to expect, and I had no idea where I would end up,” Scott said.

In Broderick’s laboratory, however, Scott discovered that research is, in fact, her passion.

“It’s been really, really awesome working in Professor Broderick’s lab,” Scott said. “When I first came in I worked under a really cool graduate student, Jeremiah Betz, who helped teach me different skills for doing research.”

Under Betz’s guidance, Scott made and analyzed three of the enzymes that the group studies. The experience enabled her to learn how to perform different techniques in the lab, as well as contribute to studying the enzymes.

The work also led Scott to earn her own independent research project to pursue with the help of Assistant Research Professor Eric Shepard. Her research has focused on three enzymes that work together to synthesize a complex iron (Fe) metallocluster that binds biologically interesting molecules together, such as carbon monoxide and cyanide, which can be toxic to living organisms. The enzymes then insert the metallocluster into another enzyme called the [FeFe]-hydrogenase, which uses the cluster to produce hydrogen gas.

“The [FeFe]-hydrogenase can produce hydrogen at high rates, which is significant because hydrogen is recognized as a clean fuel, and there is a great deal of interest in it as a renewable energy source,” Scott said.

“Theoretically, the only byproduct of hydrogen fuel is water,” Scott said. “But it’s hard to make. Hopefully by studying these enzymes we can figure out a more efficient way to make hydrogen.”

Scott said she enjoyed the autonomy that came with that project, as well as the fact that she got to work on every aspect of the research.

“It was even more wonderful than I thought it would be,” she said. “I didn’t really know what I wanted to do, but I knew I wanted to try research, and I really ended up liking it.”

Part of what she likes is that research opens up a new way of looking at and trying to understand the world.

“You’re looking at how the universe works at this small, molecular level,” Scott said. “It doesn’t really behave like you think it would. It’s interesting to try to figure out different ways to try to investigate something at such a small level that you can’t see or understand intuitively. I find that really fascinating.”

Scott added that she is grateful for the opportunity to work under the guidance of Broderick and others, including Betz, Shepard and Professor Robert Szilagyi.

Scott has already received recognition for her efforts: In 2015, as a sophomore, she won a Goldwater Scholarship. The Goldwater is the nation’s premier scholarship for undergraduates studying math, natural sciences and engineering. She also contributed as a co-author on a paper that was published in 2015 in the journal Biochemistry.

Broderick said Scott has been an “exceptional” student from the start, with the ability to grasp and synthesize complex ideas and apply those ideas to her own research.

“As all undergraduates do in my lab, Anna started working under the direct guidance of a senior graduate student, but she rapidly transitioned to work that was more and more independent as she demonstrated her research ability and her skills with technically challenging laboratory techniques,” Broderick said. “Her research contributions have led to her co-authorship on multiple publications from the lab, including one in preparation on which she is first author.

“Anna is also scientifically adventurous, and has participated in two different off-campus summer research programs, one at the National Renewable Energy Laboratory and the other at MIT, during her time at MSU,” Broderick added. “I am so pleased I had the opportunity to be her research adviser during her undergraduate years at MSU and am excited to see how she grows as a scientist in this next step in her training as an NSF fellow at Caltech.”

The daughter of two chemists at Los Alamos National Laboratory, Scott said that, as a kid, she had a great deal of exposure to nature and the outdoors, and she was always intrigued by what she observed.

“Learning about chemistry helped me to understand better why nature is the way it is and what makes it so fascinating,” Scott said.

Scott plans to spend her career conducting research, either as an academic research professor or through working at a national laboratory.

She hopes to devote her work to something related to renewable energy, because “I think (renewable energy) is one of the biggest problems to tackle in the world,” she said.

“I also want to be a mentor for other scientists,” she added. “I’ve had a lot of great mentors, and they’ve really helped me be successful.”

The National Science Foundation selected this year’s 2,000 recipients of the Graduate Research Fellowship from a pool of more than 13,000 applicants. According to the NSF, the Graduate Research Fellowship Program is critical in the agency’s overall strategy to develop a globally engaged workforce necessary to ensure the nation’s leadership in advancing science and engineering.