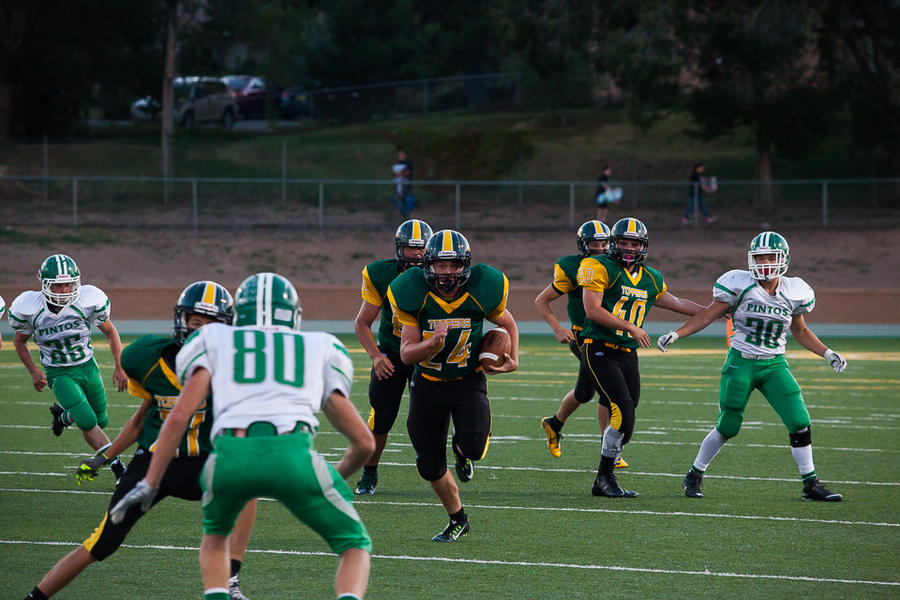 By MORRIE PONGRATZ
Voice of the Hilltoppers
Friday night too much Allen Michel and too many mistakes led to a 38-12 victory for the Moriarty Fighting Pintos over the Toppers in their homecoming football contest.
The Toppers were their own worst enemy committing 9 penalties and making 5 turn-overs. They made both boo-boos in their very first series on offense getting a penalty on the first snap and fumbling on the fourth. That led to an 18-yard touchdown by Moriarty’s Elijah Tapia and a 0-6 score.

The Toppers did respond with a ten play drive culminating with a 5-yard touchdown run by Derek Selvage making the score 6-6 with 5:18 left in the first quarter. That’s when the Allen Michel show began.  Michel is the tailback for the Fighting Pintos. He scored the tie-breaking TD on a 23-yard run and then another on a 3-yard plunge. That ended scoring in the first half with Moriarty ahead 19-6. Oh, yes, Allen Michel kicks the extra points and kickoffs, too.

Michel wasted no time getting to paydirt going 73 yards for a touchdown on Moriarty’s second play of the 3rd quarter! With 2:10 left in the 3rd quarter Michel went 70 yards for his fourth touchdown making the score 31-6 in favor of Moriarty.

Moriarty’s backup tailback, Jon Roj, scored from one-yard out at the 5:27 mark of the fourth quarter. The Toppers did not quit and responded with an 8-play drive ending with Selvage scoring from one yard out making the final score 38-12.