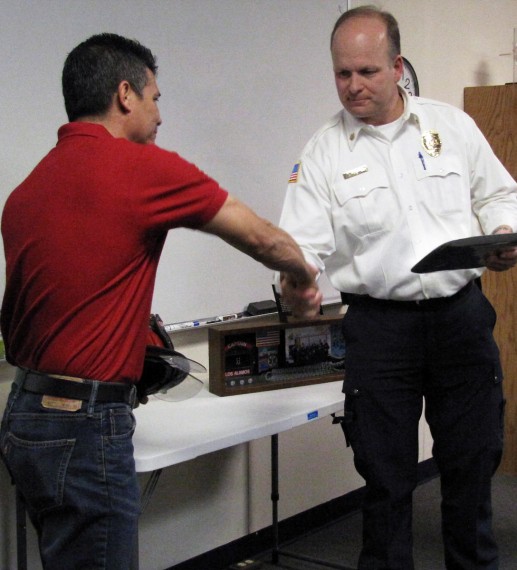 “Capt. Martinez was one of the first people I met with when I came here to see if this is where I wanted to work and I quickly recognized that he really only wanted the same things I did – a well-trained department, people treated fairly and people held accountable if they weren’t doing their job,” Hughes said. “It was clear to me that Flavio had a lot of passion and love for this department … I thank him for his many positive contributions.” 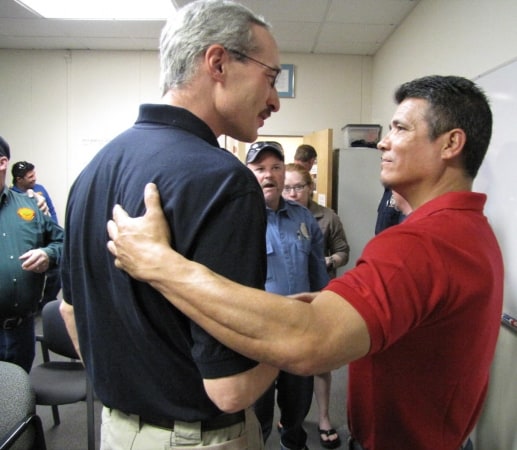 Fire and Police Chaplin Jeff Eichorst thanks Capt. Flavio Martinez for his service.
Photo by Carol A. Clark/ladailypost.com

“Flavio joined LAFD in 1990 and he was a member of our fire investigations for 15 years,” Grider said. “One of his biggest accomplishments was being the chief fire contract negotiator the last four years.”

Driver Engineer Danny Archuleta said Martinez was, “a big inspiration in my life.”

“We have posters hanging all over that say things like courage, pride, honor – I really saw those things alive in Flavio,” Archuleta said.

“Flavio is one of the true mentors in my life.” she said. “They say your first captain is the one who really sets your career on its path and I am grateful and proud that Flavio was my first captain.”

Martinez summed up his life at LAFD saying his career went by very fast and that he hadn’t intended to stay with it very long. 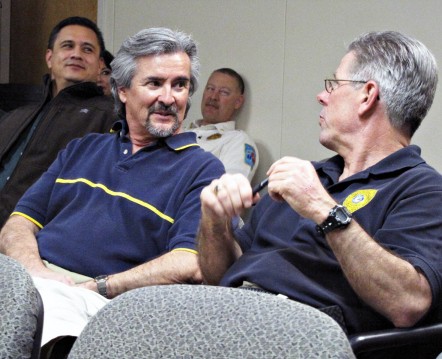 Assistant County Attorney Dan Gonzales, left, and Police Chief Wayne Torpy were
among many who turned out to wish Fire Capt. Flavio Martinez well in his retirement.
Photo by Carol A Clark/ladailypost.com

“It was a stepping stone to the lab,” he said. “I spoke with my father and he said, ‘What do you want to do, make lots of money or make a difference?’ You’ve just got to stand for something. I met with Chief Hughes and I saw him as a guy with honor and I feel this department is headed for good things.”

Martinez loves the outdoors and in his retirement intends to spend as much time in the wilderness on horseback as possible.