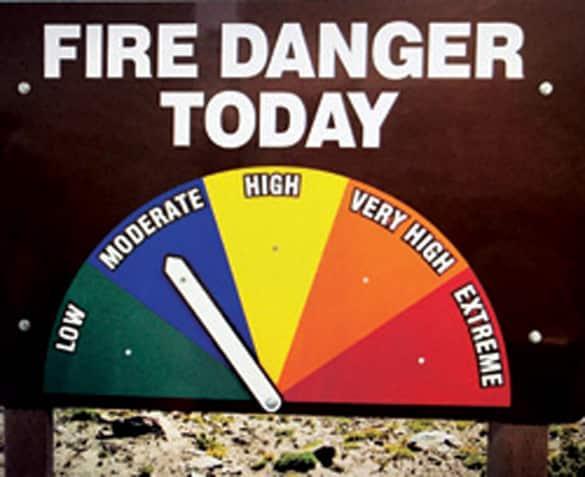 More than 100 years ago, fire managers decided it was time to develop a fire rating system to predict the potential for large fire activity. Then in the 1930s, a fire danger meter that included some of the environmental variables we have today was developed.

The National Fire Danger Rating System (NFDRS) is a system that allows land agencies to estimate today’s or tomorrow’s fire danger for a given area. It integrates the effects of existing and expected states of selected fire danger factors into one or more qualitative or numeric indices that reflect an area’s fire protection needs. It links an organization’s readiness level (or pre-planned fire suppression actions) to the potential fire problems of the day.

This year, NFDRS2016, which was tested during the 2017 fire season, is being introduced throughout the county and it is hoped that it will have transitioned into place by May 2020.

Significant changes to the new system include improvements to the calculations of fire danger indices and components; an updated system to calculate live and dead fuel moisture values; automation of the calculations in the Weather Information Management System; and a reduction in the number of fuel models to more actively reflect fire danger levels over the landscape.

In this second in a three-part series, the Los Alamos Daily Post and Los Alamos Fire Department Wildland Fire Division are providing information for the community as we continue to rely on the fire danger signs posted throughout the area to determine the level of local fire danger.

The symbols and adjectives shown below are used to alert the public of fire danger levels, using adjectives and colors based on criteria established by the NFDRS.

IGNITION: A rating of the probability that a firebrand will cause an actionable fire.

SPREAD: A rating of the forward rate of spread of the head of a fire.

SPOTTING: Behavior of a fire producing sparks or embers that are carried by the wind and which start new fires beyond the zone of direct ignition by the main fire.

CONTROL: The completion of control line around a fire, any spot fires therefrom, and any interior islands to be saved; burned out any unburned area adjacent to the fire side of the control lines; and cool down all hot spots that are immediate threats to the control line, until the lines can reasonably be expected to hold under the foreseeable conditions.

Spread: Furious spread likely, along with intense burning. Development into high intensity burning will usually be faster and occur from smaller fires than in the very high fire danger class.

Control: Direct attack is rarely possible and may be dangerous except immediately after ignition. Fires that develop headway in heavy slash or in conifer stands may be unmanageable while the extreme burning condition lasts. Under these conditions the only effective and safe control action is on the flanks until the weather changes or the fuel supply lessens.

Spread: Immediately after ignition, spread rapidly and increase quickly in intensity. Fires burning in light fuels may quickly develop high intensity characteristics such as long-distance spotting and fire whirlwinds when they burn into heavier fuels.

Control: Fires may become serious and their control difficult unless they are attacked successfully while small.

Spread: Fires spread rapidly. High-intensity burning may develop on slopes or in concentrations of fine fuels.

Control: Fires may become serious and their control difficult unless they are attacked successfully while small.

LOW – GREEN
Ignition: Fuels do not ignite readily from small firebrands although a more intense heat source, such as lightning, may start fires in duff or dry rotted wood.

Spread: Fires in open cured grasslands may burn freely a few hours after rain, but woods fires spread slowly by creeping or smoldering, and burn in irregular fingers.

Spotting: There is little danger of spotting.