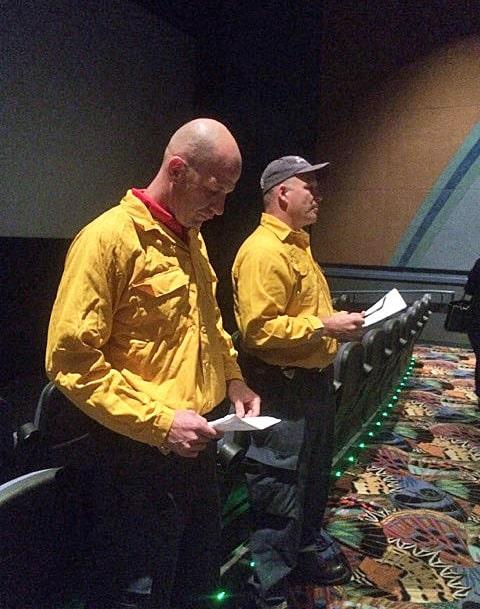 Los Alamos County Fire Chief Troy Hughes, right, addresses the audience Oct. 20 at one of several showings of ‘Only the Brave’ at the Reel Deal Movie Theater. Following his comments, Division Chief Jeff Wetteland read they names of the 19 members of the Granite Mountain Hotshots who died June 20, 2013 in the Yarnell Hill Fire. Photo by Maire O’Neill/ladailypost.com
By MAIRE O’NEILL
Los Alamos Daily Post
maire@ladailypost.com

Members of Los Alamos Fire Department are on hand 24 hours a day, 365 days a year, ready to respond to any emergency in this community. While there are so many heroic actions by the fire department that the community never hears about, the following are some of the LAFD stories the Los Alamos Daily Post reported on in 2017.

Rumble in Rio: March 18, Firefighter Kenny Martinez took on Albuquerque Police Ofc.Thomas Zaleski in the Rumble in Rio charity event. Martinez said he was entering the ring prepared to win and win he did. The referee stopped the match some 34 seconds and Martinez won by a technical knockout in a unanimous decision of the judges.

Mari Mac Shopping Center: Several LAFD units responded at around 11 a.m. April 8 to reports of a possible natural gas leak at Bealls Department Store in the Mari Mac Shopping Center. The store’s Assistant Manager Eric Larson called emergency officials after two of his associates alerted him to the smell of gas. When firefighters arrived, Larson said they took two steps into the building and immediately decided to evacuate shoppers and staff. County utilities responded quickly to the scene and began checking for the source of the leak. The AutoZone store next to Bealls was evacuated next followed by Pajarito Brew Pub. Eventually, the source of the leak was found on the roof above AutoZone and was isolated. All three locations were naturally ventilated by LAFD and AutoZone and Bealls staff were allowed to return to work.

Pacheco said two dogs had gotten loose while their owner was out of town. One of the dogs, called Smiley, was located on a ledge 30 feet down and just above a 200-foot drop. Meyersick and Williams tied on, went down and immediately hooked carabiner onto Smiley’s collar to prevent him from dropping off the ledge. Meyersick gave the dog some snacks before he was harnessed and hoisted up.

LAFD Station 4, B Shift Honored with Phoenix Award: LAFD Chief Troy Hughes and members of Los Alamos County Council honored Station 4’s B-shift at the May 2 County Council meeting. The award is presented to LAFD personnel that have been involved in calls where the patient suffered cardiac arrest, was resuscitated and not only survived, but was able to return home from the hospital.

Blue Dot Trail Rescue: On May 14, LAFD EMT’s responded to a call from a hiker in distress on the Blue Dot Trail in White Rock. The hiker was eventually located and EMTs walked him to the top of the trail.

Six New Trucks Celebrated: LAFD hosted a push in ceremony May 22 for six new vehicles including two pumper trucks, a heavy rescue truck, a light rescue truck, a type four wildland engine and  a type five wildland engine. The pumpers and rescues are owned by the Department of Energy and are provided to LAFD through a cooperative agreement.

Family Safe After Lightning Strikes Home: When LAFD received a call on the evening of June 6 that lightning had struck the home of Leo and Clare Webber on Los Pueblos Road, engines, trucks and medical units were dispatched from four stations. Nobody was hurt in the incident

Firefighters quickly located the area burning and had to break down a wall between a second story bathroom and the hallway to extinguish the fire. After that, they continued to monitor the structure for hot spots and waited for fire inspectors to arrive. At the same time, LAFD also responded to a fire alarm at the Los Alamos Eco Station on East Jemez Road.

Boulder on Truck Route: On the night of July 30, LAFD responded to reports of a large boulder on the roadway just east of the LANSCE facility. A passing car collided with the boulder, damaging the car, which had to be towed from the scene. The driver was not injured. LAFD personnel tied a rope around the boulder and towed it off the roadway allowing the road to be reopened to traffic.

Resuscitation Academy: LAFD in conjunction with the Maryland Resuscitation Academy presented two one-day resuscitation academies Sept. 29-30 at the University of New Mexico-Los Alamos which were attended by emergency responders, fire/EMS chiefs and other medical personnel from throughout the state. The academy is a one-day, intensive course dedicated to improving survival rates of patients suffering pre-hospital cardiac arrest.

Fundraiser for New Mexico Cancer Center: For the seventh consecutive year, the International Association of Firefighters Local #3279 recognized Breast Cancer Awareness Month in October by raising funds for the New Mexico Cancer Center in Albuquerque. T-shirts designed by Local #3279 President Bert Quintana and Marisha Griego, LAFD administration staff member were sold and worn by LAFD personnel throughout October. They may be purchased at the LAFD Administration Offices at 999 Central Ave., Suite 200. Firefighter and union treasurer Kevin Kamplain organized the fundraiser.

Sad Time for LAFD: The death of former LAFD Capt. John H.  Snyder on Oct. 14 was a sad time for LAFD. A 13-year member of the Department, Snyder died following a short battle with cancer. Highly-respected among his firefighter brothers as a family man and colleague, he was known for his quick wit and his cheerful demeanor. During his career, he was a Paramedic/Captain and Support Officer. He also assisted the New Mexico Firefighter’s Training Academy as an instructor. Snyder was honored at a memorial service Oct. 21 at Los Alamos High School Gymnasium