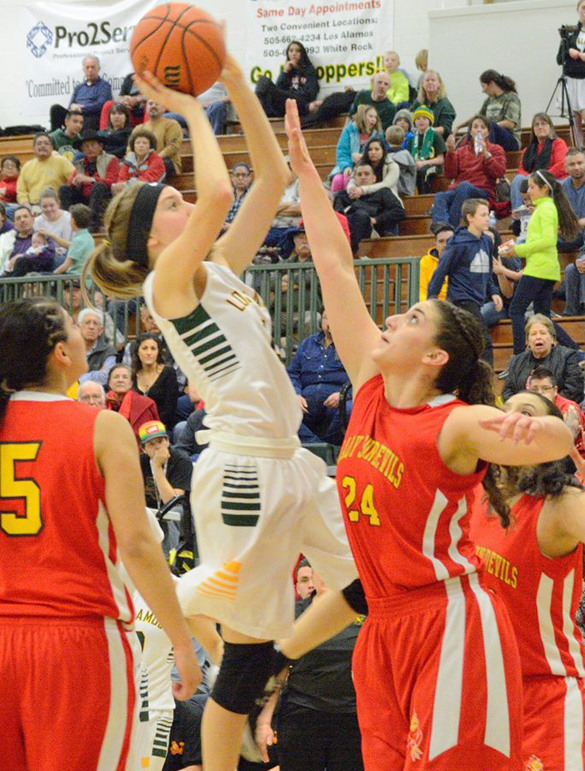 Fans who packed Griffith Gymnasium at Los Alamos High School to see Wednesday’s much-anticipated matchup between the Lady Hilltoppers and the Española Valley High School Lady Sundevils were treated to a thriller of a game.

The third-ranked Sundevils and the fourth-ranked Hilltoppers battled back and forth until the final buzzer, with Española escaping with a one-point victory 76-75 after blowing a 15-point halftime lead.

“To come into a hostile place and come out with a win, you take it,” Española Coach Cindy Roybal said. “Credit their team for coming back. Props to my team for holding on.”

The Sundevils forced a five-second call on the inbounds play to start the second quarter and that set the tone for the Sundevils. Española’s defense frustrated the Hilltoppers. Romero started an 11-0 run by the Sundevils that she finished with a free throw that gave Española a 25-15 lead. There was no slowing down the Sundevils, who took a 40-25 lead into the locker room at halftime.

The precision of the Sundevils in the first half didn’t carry over into the second half. Española made some ill-advised turnovers that led to an 11-2 run by the Hilltoppers that started with a three-pointer by Kayla Salazar and ended with another bomb by Logan. Los Alamos Coach Nestor Trujillo began substituting strategically, bringing in players to hound the Española ball-handlers when the Hilltoppers were on defense, then bringing in other players when Los Alamos was on offense.

The strategy worked as Española had a hard time bringing the ball up. Only strong play by Romero and Española post Alexis Lovato kept Española in front. A three-pointer by Hilltoppers’ Makaela Jones, followed up by a rare four-point play by Logan, made the score 48-44 in favor of the Sundevils.

Lovato and Romero scored Española’s last seven points of the third quarter to keep the Sundevils clinging to a 57-50 lead heading into the fourth quarter. After two free throws by Romero gave the Sundevils a 61-52 lead, the Hilltoppers ran off eight unanswered points to make it a one-point game 61-60.

Lovato, who finished 11-of-11 from the free-throw line, gave the Sundevils a 64-61 lead with a pair of free throws. Salazar went to the line for the Hilltoppers and made her first free throw. She missed her second, but Siena Ahlers rebounded the miss and put the ball back in the basket to tie the score. The Sundevils turned the ball over on their next possession and a driving layup by Ashlynn Trujillo gave the Hilltoppers a 66-64 lead with less than four minutes left in the game.

The score swung back and forth with the Sundevils taking a two-point lead only to have Los Alamos tie it up. With 1:22 left to play, a pair of free throws by Trujillo tied the score 72-72. A key player-control foul on Salazar gave the ball to Española and the Sundevils took a 74-72 lead after two free throws by Romero with 40.4 seconds left in the game.

Logan went to the line to shoot a pair of free throws, but made only one. The Sundevils got the ball to Romero, who dribbled away precious seconds of the clock. With Los Alamos frantically chasing her, Romero spotted Lovato wide open under the basket and passed her the ball. Lovato laid the ball in off the glass to give the Sundevils a 76-73 lead with 10.9 seconds left.

“I was trying to waste time,” Romero said. “I saw Alexis (Lovato) wide open and she finished the shot.”

Lovato, who finished the game with 30 points, had faith Romero would find her.

“I knew she was going to see me,” Lovato said.

The drama wasn’t over. Elena Abeyta went to the free-throw line for Los Alamos with 7.5 seconds left in the game. She made her first shot, but missed the second. Jones grabbed the rebound and was immediately fouled by the Sundevils. With a chance to tie the score, she made just one of her free throws with 5.8 seconds left. On the inbounds play, Española  got the ball to Romero and the Sundevils ran out the clock before the Hilltoppers could get off a shot. The Sundevils survived with a 76-75 victory.

“Katie (Romero) played unbelievable,” Coach Roybal said. “She just would not let us lose. She willed the girls not to give up.”

Romero finished with 26 points. Lovato and Romero combined to score 32 of Española’s 36 points in the second half. 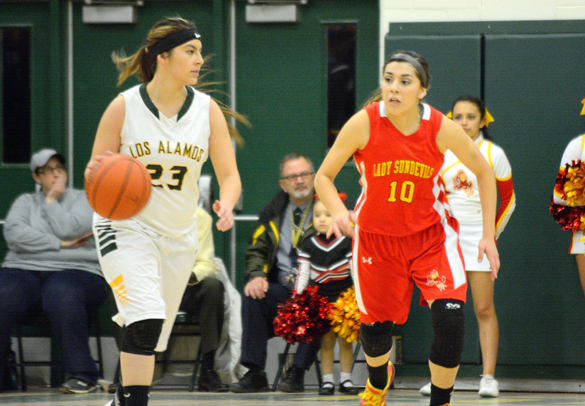 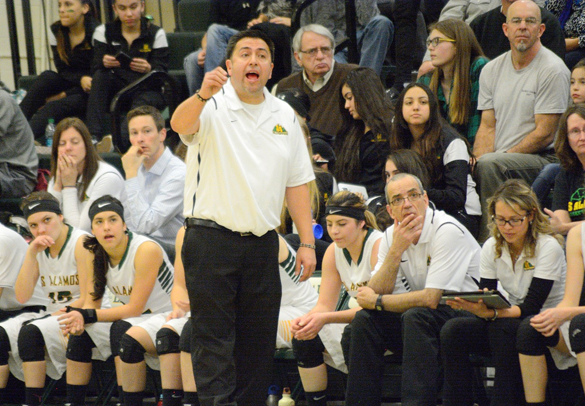