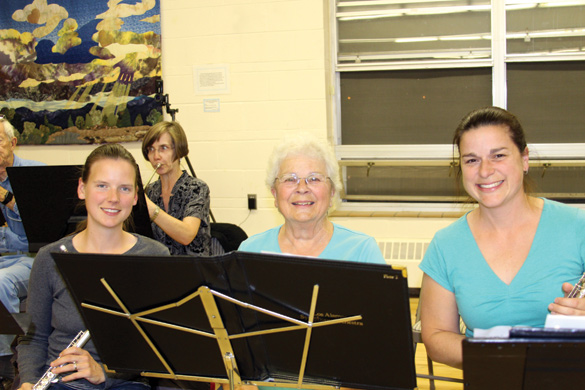 The Los Alamos Symphony Orchestra will present its Fall Concert at 7 p.m. Friday, Oct. 28 at Crossroads Bible Church. The concert is free, but donations are accepted and appreciated.

LASO is celebrating its 70th season in 2016-2017. Fifty six musicians will be performing (36 strings and 20 winds and brass) under the baton of conductor David Chavez.

Three well-loved pieces make up the Fall Concert: Overture to Fidelio (Beethoven); Prelude to the Afternoon of a Faun (Claude Debussy) and Symphony No. 41 (W.A. Mozart).

Flautist Deanna Teague will perform the flute solo in Prélude à l’après-midi d’un faune (Prelude to the Afternoon of a Faun).

Debussy’s inspiration was a poem, L’après-midi d’un faune, by his friend Stéphane Mallarmé, about the dream of a pan-pipe-playing faun of seducing two sleeping nymphs.

Teague has been playing with the Symphony for three years. Teague majored in music at Texas Tech. She currently teaches band at Pinon Elementary.

Teague started playing the flute at age 12. The young musician and her supportive family drove for an hour to reach her teacher for lessons.

“I’ve always wanted to play the entire “Afternoon of a Faun,” Teague said. “I’ve only played it in part before this.”

A second member of the flute section, Kay Dunn, has played with the Symphony for many years. She played with the ensemble from 1965-1982 then returned to the group in 2003.

Dunn quit lessons at age 16 and laid down her flute for 25 years before returning to the instrument. She loves the Symphony for the fun, the camaraderie and the challenge, Dunn said.

The flute section (Teague, Dunn and Laura Taylor) will also be featured in Overture to Fidelio.