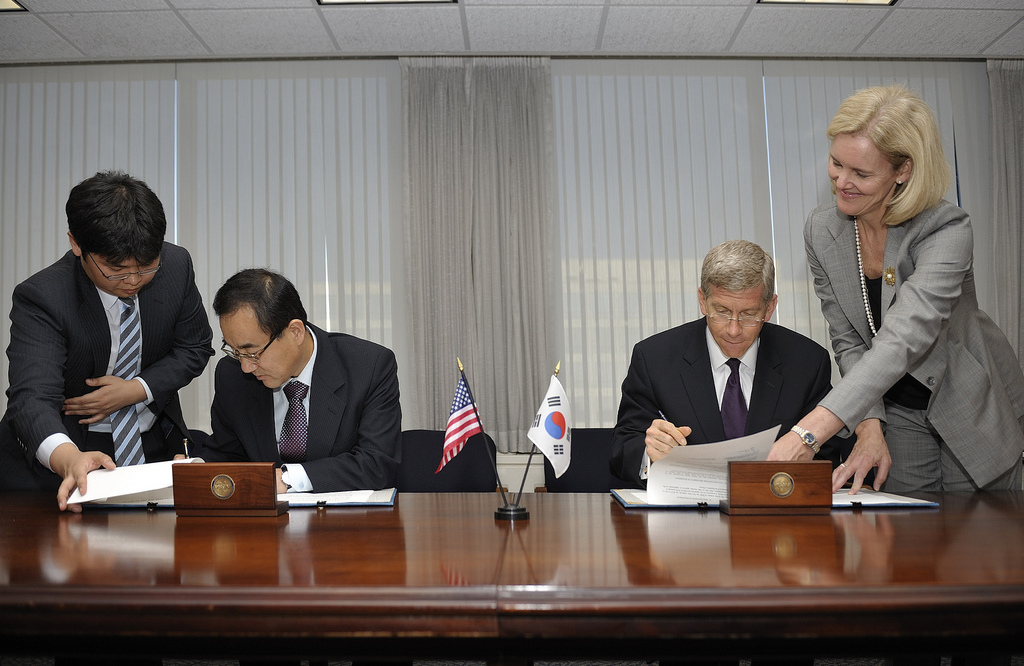 DOE and Korean officials sign a memorandum of understanding in 2010. Courtesy/NNSA News

The funding, provided by the Korean Ministry of Foreign Affairs and Trade and facilitated by the U.S. Department of State’s Nuclear Smuggling Outreach Initiative (NSOI), will be used for the installation of radiation detection equipment at the Baku Airport.

“The Republic of Korea’s continued and generous support of NNSA’s work to strengthen nuclear security worldwide shows the strength of our relationship and the global commitment to nuclear security,” said NNSA Deputy Administrator for Defense Nuclear Nonproliferation Anne Harrington. “Partnerships like this allow NNSA to make even more progress in the global effort to secure vulnerable nuclear material and impede the efforts of terrorists and proliferators to acquire dangerous radioactive materials.”

The radiation detection equipment will provide Azerbaijan with additional tools to detect, deter and interdict illicit trafficking in special nuclear and radioactive materials that could be used to construct an improvised nuclear device or a radiological dispersal device.

This is the Republic of Korea’s fifth contribution to NNSA under the G8 Global Partnership – an agreement facilitating cooperation between 25 countries, including Korea and the U.S., to address nonproliferation, disarmament, counterterrorism and nuclear safety issues through cooperative projects.

These contributions showcase the strong partnership between the U.S. and Korea, which hosted the Nuclear Security Summit in 2010 and 2012, respectively.

Financial and in-kind contributions from international partners help augment NNSA nuclear nonproliferation programs. In addition to the Republic of Korea, NNSA, working in collaboration with NSOI, has received support from Canada, Finland, the Netherlands, New Zealand, Norway and the United Kingdom to pursue nonproliferation efforts around the world, including:

For a fact sheet on NNSA’s SLD program, click here.

Established by Congress in 2000, NNSA is a semi-autonomous agency within the U.S. Department of Energy responsible for enhancing national security through the military application of nuclear science.

NNSA maintains and enhances the safety, security, reliability and performance of the U.S. nuclear weapons stockpile without nuclear testing; works to reduce global danger from weapons of mass destruction; provides the U.S. Navy with safe and effective nuclear propulsion; and responds to nuclear and radiological emergencies in the U.S. and abroad. Visit www.nnsa.energy.gov for more information.