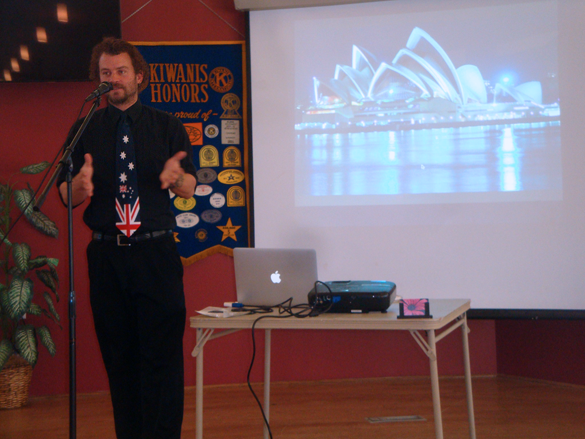 Justin Ramsey, a 2002 graduate of Los Alamos High School who is a musician, actor, photographer, and sometimes a bartender, was experiencing a pause in his acting career when he decided to do something new. He went to Australia.

“All I had planned out,” he told Kiwanis March 10,  “I was to land in Sydney.”  When he arrived “down under,” he got off the plane and asked a taxi driver to take him to a youth hostel. The taxi fare turned out to be $180. “Everything is very expensive in Australia,” he said, “about three times our rates.”

Nevertheless, the next 11 months proved to be a wonderful adventure. He took hundreds of photos and came home to produce an elegant art photography book and a calendar showing off the beauty of Australia. Both are now for sale. (Call him at 505.412.2392.) He has plans for several more art books on North American locations. He is currently visiting his mother, Carolyn, and his stepfather, Chip, in Los Alamos. They attended his photo presentation.

In his talk to Kiwanis, Ramsey began with photos and a story about the Sydney Opera House. The idea for its unusual shape came to the architect “as he was peeling an orange,” Ramsey said. Unfortunately, he died before the building was completed. Today, the building is famous worldwide. Ramsey showed photos of it in daylight and at night.

He also showed photos of China Town and its gardens, of the highest tower in Sydney, of a cathedral below (taken from the tower), of the botanical gardens, and of the fireworks that are held once a month in Sydney. He said the city is “very safe,” and he showed off its beauty in photos of lovely flowers and wildlife (notably exotic birds), the Sydney Harbor Bridge, and a lovely fountain that looks like a huge white dandelion ready to release its seeds to the wind.

Fire season arrived while Ramsey was in Sydney, and smoke billowed over the city. People were frightened, he said, but, “I felt right at home.”

He went on to visit Brisbane, “the Las Vegas of Australia.” He showed a photo of a pagoda, war memorials, and “fantastic architecture” there. He shared his photos of an enormous Ferris wheel at night (a time exposure), mechanical pelicans (city art), “amazing cathedrals,” and Kangaroo Point, where, he said, he got to rock climb while enjoying a free rock‘n’roll show.

He visited the Great Barrier Reef, although, he said, unfortunately, “It is deteriorating.”

And he took a road trip through the Outback. The Outback is wonderful, he said, and, like Los Alamos, it has “gorgeous sunsets.” He saw hundreds of kangaroos, photographed waterfalls, saw King’s Canyon, traveled along the Great Ocean Road, and arrived at Melbourne, where he got a job teaching climbing to young people.

He even did some work in a movie that was filming in Australia.

He didn’t see it all, of course. He couldn’t in 11 months. He noted that Australia “is the same size as the continental U.S.” Most of the people live on the coast, he said, because that’s where the water is. He added that Australia’s history shows that it was “populated by prisoners,” but, he said, “I think they lucked out, because it’s awesome.”