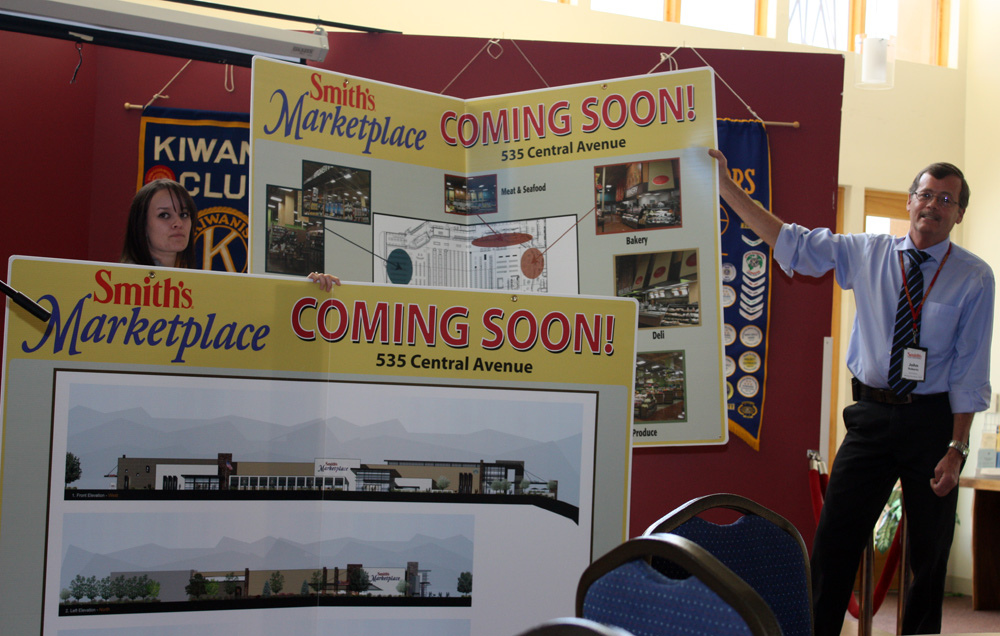 Elizabeth Maestas and John Roberts of Smith’s with posters of Smith’s Marketplace scheduled to open in May. The posters can be seen in the front of Smiths at 535 Central Ave. Photo by Bonnie J. Gordon/ladailypost.com
By BONNIE J. GORDON
Los Alamos Daily Post

Roberts gave a presentation to the group, gathered at Trinity on the Hill, about the new Smith’s Marketplace under construction on Trinity Drive. At 110,000 square feet, the new store is 2.5 times larger than the current store at 43,000 square feet.

“This is the most expensive store Kroger has constructed to date,” Roberts said. “Our current store has been at capacity for years. The Los Alamos store does very well for our company. Los Alamos is an extremely good community to be in.”

Smith’s is preparing to add 150 employees to its roster, more than doubling its staff, he said. The store is taking applications now and plans to begin hiring in March.

“One feature people are sure to appreciate is downstairs bathrooms!” Roberts said.

There is space for five other businesses at the site, but no firm plans are in place for the spaces, he said.

There will be eight rows of parking and a drive-up pharmacy. Chinese food, pizza and local cuisine are some of the offerings planned, Roberts said. Another feature of the new Smith’s is a meat aging room. Also, the entire back of the new building will house perishables. New merchandise will be available at the store including clothing, sporting goods and housewares.

“We are planning a service deli along the edge of the canyon, with a Starbucks and a patio area,” Roberts said. “There will be three or four cook stations manned by a chef.”

Roberts grew up in Los Alamos. He moved here with his family as a child in 1966. He has worked for Smith’s since 1974. He said that the target date for the grand opening of Smith’s Marketplace is May and there currently are no plans for the site of the old store.