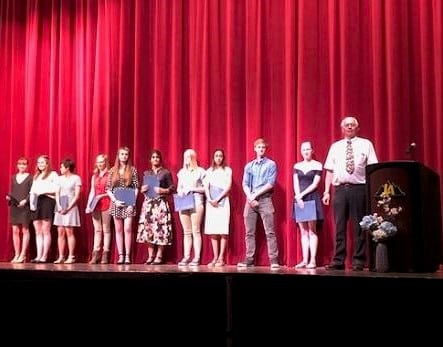 The recipients of the Kiwanis scholarships are Rachel Frankle, Ben Rees, Priyanka Velappan, Katelyn Green, Radhika Iyer, Ruby Selvage, Sara Shiina, Miriam Wallstrom, Sydne Ashford, Amber Cline and Emma Tompkins. Tompkins didn’t attend the ceremony, but the other 10 came up from the audience, one by one, as their names were called, and lined up next to Casperson.

Casperson said there were hundreds of parents and friends in the audience. They “pretty well filled Duane Smith Auditorium,” he said—and they walked in through an attractive, recently remodeled lobby.

The ceremony lasted ”over two and a half hours,” Casperson said.

The Kiwanis presentation came “fairly close to the end,” he said, and it was “a surprise to most of them.” They all seemed “very grateful,” he added, and there were many smiles, as his line of recipients grew longer and longer. (He kept Tompkins’ certificate to be  awarded later.)

The scholarship recipients will actually receive their checks when they come to meet club members in a series of luncheon visits this summer. A letter provided to recipients said that each one will have two to five minutes to speak on ”your experience at LAHS, your service to the school and community, and your plans for the future.”

Asked what it was like to stand in front of the crowd and call up each recipient, Casperson said, “It was fun.” He knew the Key Club members in the group well—and nine of the 11 (all except Tompkins and Cline), were members of Key Club.

Some were called up over and over again to receive honors that they had won from many different organizations. Casperson mentioned, for example, Ben Rees, who received “an enormous number of awards,” all well-deserved. He also mentioned Selvage, who had served as Key Club Vice President; Shiina, who was Secretary; Wallstrom, who was President; and Ashford, who was Lieutenant Governor.

Casperson noted that 2017-2018 has been an extraordinary year for Los Alamos Key Club, which had excellent leadership, participated in countless good projects in the community, and won many  Kiwanis awards.

“We’re going to miss these people,” he said.