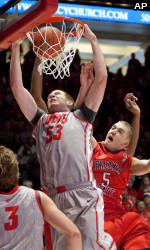 Colorado Springs, Colo. – For the second time in the last three weeks, Alex Kirk of Los Alamos has earned a Mountain West honor, being named Co-Player of the Week after leading UNM to a pair of home wins in its first 2-0 conference start in 11 years Sunday.

Kirk shared the award with Jamaal Franklin of San Diego State. It’s Kirk’s second time being honored this year, and it’s the second in the last three weeks.

Kirk was honored two weeks ago after leading UNM to a 55-54 win at No. 8 Cincinnati. For Franklin, it’s his fourth career honor.

In Wednesday’s 65-60 win over the Runnin’ Rebels, the sophomore center hit two 3-pointers while leading all scorers with 23 points, adding nine rebounds, one block, one assist and one steal.

Against Fresno State, the Los Alamos, N.M., native scored 12 of his game-best 19 points in the second half, adding a career-high 14 rebounds, two steals and two blocks as the Lobos collected the 72-45 win.

Kirk missed the 2011-12 season with a back injury, and actually went 603 days between games from the end of his freshman year to the start of his sophomore year.

Kirk is averaging 12.5 points per game and 7.6 rebounds per game, and he leads UNM with 23 blocks.

Franklin averaged 21.5 points and 12.5 rebounds per game as San Diego State defeated Fresno State on the road and Colorado State at home in overtime to begin Mountain West play with a 2-0 mark.