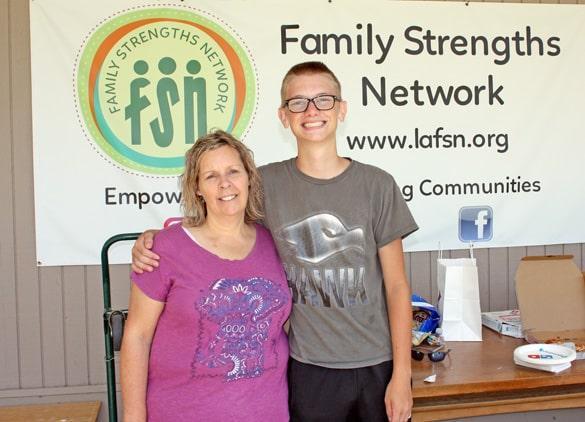 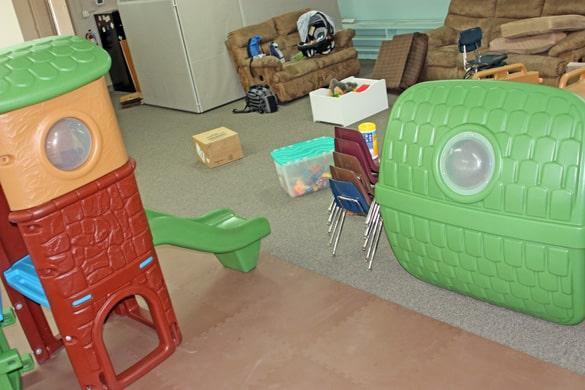 FSN‘s play structures, furniture and other items are moved back into the building on Orange Street. The organization received a $15,000 grant to purchase new carpet, furniture and paint for the building. Photo by Kirsten Laskey/ladailypost.com

The Family Strengths Network’s (FSN) space on Orange Street recently got a makeover with new furniture, carpet and paint.

The new look was funded through a $15,000 grant from the Delle Foundation, a local philanthropic organization dedicated to supporting early childhood, women’s health and issues important to northern New Mexico, according to its website.

Although FSN received financial assistance to make upgrades to its facility, help was still needed to box, move and store all its items and then return everything back into the building once the renovations were done.

This is where Boy Scout Kevin Clarke stepped in to help out. FSN Executive Director Carie Fanning explained she sent out a mass email looking for help and Clarke saw the request as an opportunity to do a service project to earn his Eagle Scout badge.

Fanning said she was very pleased with Clarke’s efforts.

“Kevin did a really excellent job organizing this,” she said. “I’ve been really impressed with his organizational skills.”

Clarke said all FSN’s things were moved out about a month ago. Workers returned Friday, July 27, after the renovations were completed to move everything back in. Fanning said FSN is expected to reopen Aug. 7.

Besides the Delle Foundation contributing to the project, Clarke worked with businesses such as Lowe’s, Home Depot and Office Depot to donate boxes, packing tape and Sharpie pens. J & L Storage also loaned its storage facilities.

Additionally, Clarke took charge of how everything should be packed and he organized volunteers. He explained volunteers from his church, from the FSN staff and board and community all pitched in. He said the experience helped him develop his organization skills.

Clarke, who will be in a sophomore in high school, said he has been a part of Boys Scouts for almost six years. Some of the things he enjoys the most about the organization are the camping trips and swapping stories around the campfire.

“I’ve always enjoyed that,” he said.

To any of his fellow Scouts looking to do an Eagle Scout service project, Clarke said, “I encourage anyone who is trying to do this to actually try and I give them all the good luck and advice because they are going to need it.”

Fanning said the renovations at FSN were really needed. She said she has no idea how old the original carpet was but it was ancient. In fact, she said it was getting tears and loose fibers, which were a safety concern for babies crawling on the floor. The new carpet was laid by the Los Alamos Public School staff. FSN leases its facility from the school district. Fanning said the results are wonderful.

“The carpet is amazing,” she said.

Besides new carpet and paint, Fanning said they purchased a ‘U’ shaped sectional couch from CB FOX.

“We’re super excited about the furniture,” she said.