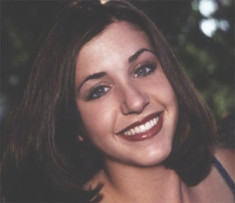 Katie Sepich
U.S. SENATE News:
WASHINGTON, D.C.—U.S. Senators Jeff Bingaman and Tom Udall applauded last night’s passage of the Katie Sepich Enhanced DNA Collection Act of 2012, a bill named for a New Mexico State University graduate student who was brutally raped and murdered in 2003.
Because New Mexico did not collect DNA from felony arrestees at the time, her killer Gabriel Avila  was not identified when he was arrested in 2003 for unrelated crimes.
It wasn’t until three years later, after his conviction for other crimes, that his DNA was taken that identified him as Katie’s killer.
The legislation will expand DNA collection efforts from serious criminal offenders in order to save lives — like Katie’s — solve crimes and prevent future tragedies from occurring at the hands of repeat offenders.
It passed in the U.S. House of Representatives on Dec. 18, 2012 and will now be sent to the president for signature.

Bingaman and Udall introduced the legislation in March 2011 to create incentives for states to implement programs to collect DNA from individuals arrested or charged with serious crimes.
“I am pleased that something positive and important has come out of the Sepich family’s tragedy,” Bingaman said. “This would never have happened without their extraordinary efforts.”
The goal of the legislation, which was first introduced in 2010 by then U.S. Rep. Harry Teague, is to encourage states that don’t have arrestee DNA collection processes to implement them.
To that end, the legislation would authorize the Department of Justice (DOJ) to award grants to cover up to 100 percent of a state’s first year cost of implementing a collection program.
“Katie’s Law is a sensible approach that would give law enforcement the tools they need to help solve crimes and prevent heartbreaking tragedies like Katie’s from happening in the future,” Udall said. “New Mexico was one of the first states to collect DNA from felony arrestees, and Katie’s parents have worked hard to see that other states can help catch dangerous criminals through DNA collection programs.”
This would allow more states to implement DNA arrestee collection programs, which allow law enforcement to compare DNA collected from adults who are arrested or charged with certain serious crimes against the FBI DNA database, known as CODIS. Those crimes include homicide, sexual assault, kidnapping, burglary and aggravated assault.
Arrestees that have DNA collected for the federal database may have their records expunged if they are acquitted, their conviction is overturned or if the charges against them are dismissed.
As a condition of receiving a grant, states must notify individuals who submit DNA samples of the relevant expungement procedures and post the information on a public website.
Menu
LOS ALAMOS