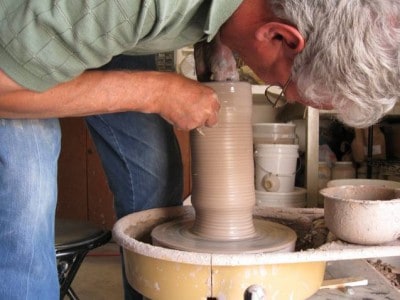 Artist Marc Hudson at work in his studio. Photo by Mandy Marksteiner

When I first visited Hudson’s garage studio he immediately plopped a six-pound lump of clay onto his wheel and leaned into the amorphous blob with his whole body until it took shape. First it became a tall cylinder, and as he coaxed the walls to expand, it became what he called a “rumptious round.”

As Hudson described it, “The clay doesn’t have any opinions about its final destiny. It’s the byproduct of erosion and it doesn’t mind that. When people see clay (or a blank sheet of paper or an empty canvas) they need to create something, to use it to solidify their imagination.”

Like the other upcoming artists at Karen Wray Fine Art Gallery, Hudson has already established his career. In 2000 he was the Artist in Residence at Fuller Lodge Art Center, and he participated in the Espanola Art Festival, and served as its president for three years.

His work looked to me like a form of meditation. It turns out that when he began working with clay, that’s exactly what it was. He had just been drafted to the Viet-Nam war. He said, “I needed a relaxing center in clay as an alternative to being in the military.”

Since then, working with clay has been a long creative journey where Marc has developed his sense of style by devising experiments that allow him to get the results that he wants.

He bought tools – a scale for measuring ingredients, bags of chemicals, books with recipes and chemical analyses of ingredients, and software that describes how ingredients interacted with one another – and experimented.

He wasn’t being a perfectionist; he just wanted glazing to be an adventure. He said, “My usual approach to clay is to exercise considerable control while it is on the wheel or in the extruder, so it is refreshing to let my guard down and let the glaze act and react serendipitously.”

“Wood ash particularly appeals to me as a primary ingredient in glazes because it is a bit of a ‘wild card,’ its effect somewhat unpredictable,” Hudson said. “Ash likes to flow at high temperatures, yet its surface tension tries to make the glaze bead up–like a struggle between control and abandonment.”

He devised a system of organization that allows him to easily look up the recipe for any glaze. Over a thousand glazes on test tiles are coiled on the ceiling of his studio. The tiles are all numbered and grouped by 30 on each string.

“While I enjoyed mixing and testing glazes a great deal, my wife told me that I needed to just get on with making pots!” said Hudson. “But learning about clay and glazes is a journey.”

One of his favorite glazes was made possible by his experiments. He wanted to reproduce a glaze that was featured in Ceramics Monthly, but he didn’t have the right equipment. Through experimentation he was able replicate the final product. 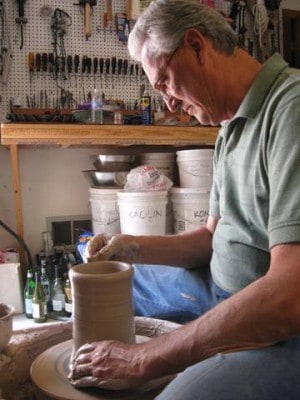