The Royal Swedish Academy of Sciences has awarded the Nobel Prize in Physics for 2015 “for the discovery of neutrino oscillations, which shows that neutrinos have mass” to: 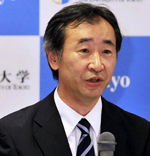 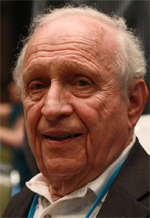 Metamorphosis in the particle world

The Nobel Prize in Physics 2015 recognises Takaaki Kajita in Japan and Arthur B. McDonald in Canada, for their key contributions to the experiments, which demonstrated that neutrinos change identities.

This metamorphosis requires that neutrinos have mass. The discovery has changed our understanding of the innermost workings of matter and can prove crucial to our view of the universe.

Around the turn of the millennium, Takaaki Kajita presented the discovery that neutrinos from the atmosphere switch between two identities on their way to the Super-Kamiokande detector in Japan.

Meanwhile, the research group in Canada led by Arthur B. McDonald could demonstrate that the neutrinos from the Sun were not disappearing on their way to Earth. Instead they were captured with a different identity when arriving to the Sudbury Neutrino Observatory.

A neutrino puzzle that physicists had wrestled with for decades had been resolved. Compared to theoretical calculations of the number of neutrinos, up to two thirds of the neutrinos were missing in measurements performed on Earth. Now, the two experiments discovered that the neutrinos had changed identities.

The discovery led to the far-reaching conclusion that neutrinos, which for a long time were considered massless, must have some mass, however small.

For particle physics this was a historic discovery. Its Standard Model of the innermost workings of matter had been incredibly successful, having resisted all experimental challenges for more than twenty years. However, as it requires neutrinos to be massless, the new observations had clearly showed that the Standard Model cannot be the complete theory of the fundamental constituents of the universe.

The discovery rewarded with this year’s Nobel Prize in Physics have yielded crucial insights into the all but hidden world of neutrinos. After photons, the particles of light, neutrinos are the most numerous in the entire cosmos. The Earth is constantly bombarded by them.

Many neutrinos are created in reactions between cosmic radiation and the Earth’s atmosphere. Others are produced in nuclear reactions inside the Sun. Thousands of billions of neutrinos are streaming through our bodies each second. Hardly anything can stop them passing; neutrinos are nature’s most elusive elementary particles.

Now the experiments continue and intense activity is underway worldwide in order to capture neutrinos and examine their properties. New discoveries about their deepest secrets are expected to change our current understanding of the history, structure and future fate of the universe.