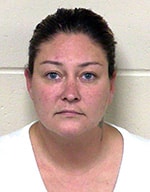 Under the agreement, Jones would plead guilty to embezzlement and receive a conditional discharge. She would be placed on three years of supervised probation and ordered to pay $5,020.69 restitution to LAYFCL. The maximum sentence for the third degree felony is three years in prison and/or a $5,000 fine.

The stumbling block for Judge Lidyard appeared to be allowing Jones to be discharged completely from probation once the restitution is paid in full.

The plea agreement was presented by Deputy District Attorney Michael Nunez on behalf of Wahlquist during what was posted as a status hearing in the case. Judge Lidyard said he wanted to look at some of the facts in the case. He said he would like to know what was the period of time over which the embezzlement was alleged to have occurred, Jones’s affiliation with the organization, how long she was in that position, what her responsibilities were and exactly how the embezzlement occurred.

“I’m inclined to postpone this plea setting until Mr. Wahlquist is available to come and advise the Court as to the considerations taken in coming to these terms. This is my sticking point right now,” Judge Lidyard said.

He said embezzlement is more than just providing the money back that was taken, that there’s something more that an individual has to do. He said serving a period of time on probation to earn that conditional discharge could change his mind.

“But simply me taking this plea today and Miss Jones paying the amount tomorrow and she’s off probation does not sit well with the Court in allowing her to accept responsibility for what potentially she has done here,” Judge Lidyard said. He added that he wanted to hear from Wahlquist why he thinks it’s appropriate to discharge her immediately from probation upon payment of restitution”.

Wolking’s report indicates that he received a report Aug. 23 that Jones was stealing thousands of dollars from the League of which she was president. The Los Alamos League is under the umbrella of the Northern New Mexico Children’s Football League. The complaint was made by members of the board whose members include Vice President Renee Lechuga, Treasurer Amy Urbatsch, Registrar Lori Ellard and Athletic Director Jason Wardlow Herrera.

The report states that Jones was the only person in charge of the League’s finances from January 2016 through August 2017, and the only person to access its bank account. At some point, Jones allegedly added a friend to the account but she maintained control. When board members began asking questions about money, the report states that Jones closed the bank account and opened another one at a different bank.

Wolking’s report said he interviewed several board members who each told a similar story. He obtained a ledger distributed by Jones but found out several people had concerns that the ledger was inaccurate and incomplete. Wolking began communicating with Annmarie Villegas, executive director of the Northern New Mexico Children’s Football League who met with Jones Sept. 7 to obtain all documentation for the League’s financial records. Villegas also gained access electronically to the League’s bank account. Wolking’s report states that it quickly became clear Jones used the League’s account and debit card for her own personal use.

A continuance for the plea agreement hearing will be set based on Judge Lidyard’s docket and availability of Wahlquist and Jones’ attorney Daniel Gower.