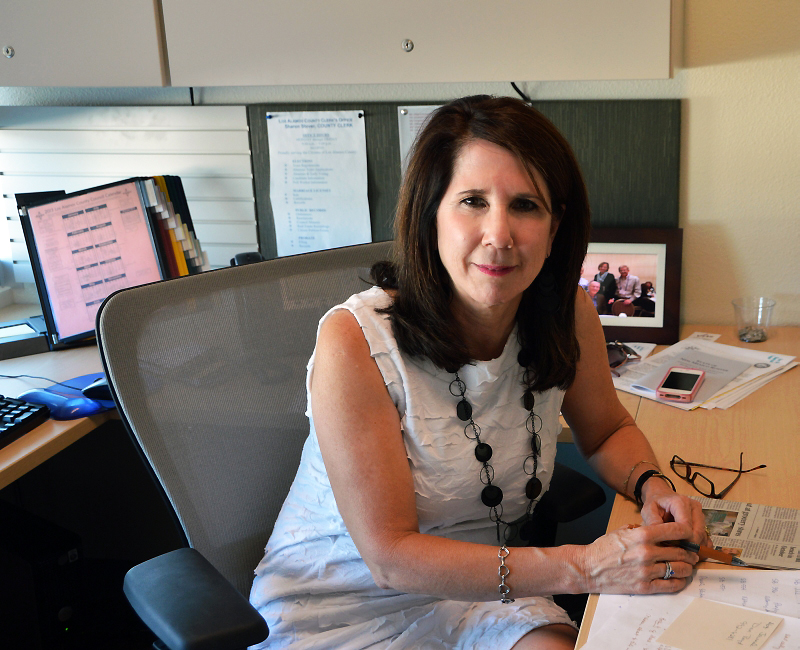 Los Alamos County Clerk discusses New Mexico laws related to sex marriages during an interview this afternoon in her office. Photo by Carol A. Clark/ladailypost.com

By CAROL A. CLARK
Los Alamos Daily Post
Los Alamos County Clerk Sharon Stover has been ordered by District Judge Sheri Raphaelson to issue a marriage license to the same sex couple turned away Tuesday.
“Judge Raphaelson signed our writ this afternoon and is ordering the clerk to issue my clients the marriage license or appear before her in court Sept. 4 to explain why not,” said John Day, the attorney representing Janet Newton and Maria Thibodeau of Los Alamos.
Day, who is an attorney with Egolf + Ferlic + Day law firm in Santa Fe, filed a petition for a writ of mandamus in District Court requesting that Judge Raphaelson order the Los Alamos County Clerk to issue a marriage license consistent with what is being done in other counties such as Albuquerque, Santa Fe, Taos and Dona Ana, he said earlier today.
“I spoke with Los Alamos County Attorney Rebecca Ehler late this afternoon and she agreed to accept service of our court documents,” Day said.
During an interview earlier today in the Clerk’s Office, Stover had not yet seen the documents. She said she will confer with the county attorney with regard to the judges order. Stover explained her position in not issuing same sex marriage licenses.
“It’s not choice – it’s law. In the State Statute related to marriage, Article 1 Section 40-1-18 includes a form of application, license and certificate and we can’t change them. They have spaces for ‘bride’ and ‘groom’ and ‘male’ and ‘female’ … this is part of the law and it hasn’t been changed since 1953, now everyone’s going in different directions on this. I want to have a good law that will hold up for all people. We need a ruling from the State Supreme Court.”
Stover said the path to getting that ruling moved forward today when the New Mexico Association of Counties (NMAC), which includes all 33 counties in the state, filed a lawsuit asking for intervener status against District Judge Alan Malott who Monday ordered the Bernalillo County clerk to issue marriage licenses to same-sex couples.
“Now the million dollar question is – if and when – the Supreme Court will hear this,” Stover said.
Menu
LOS ALAMOS