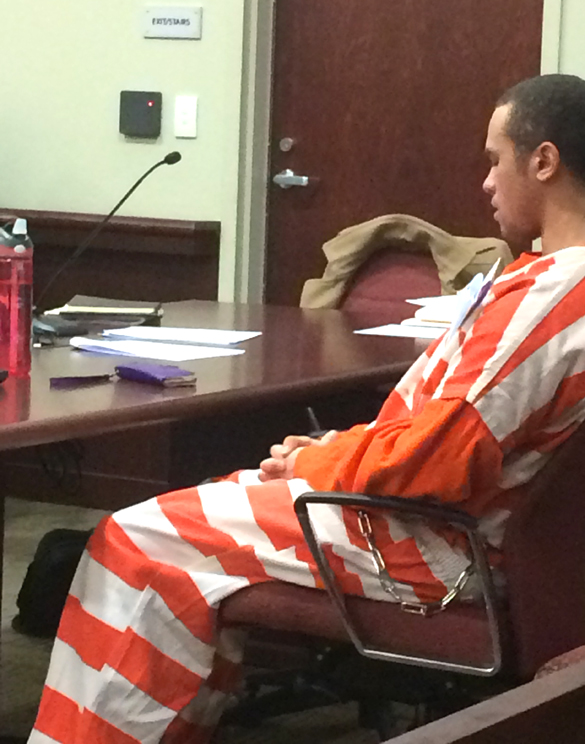 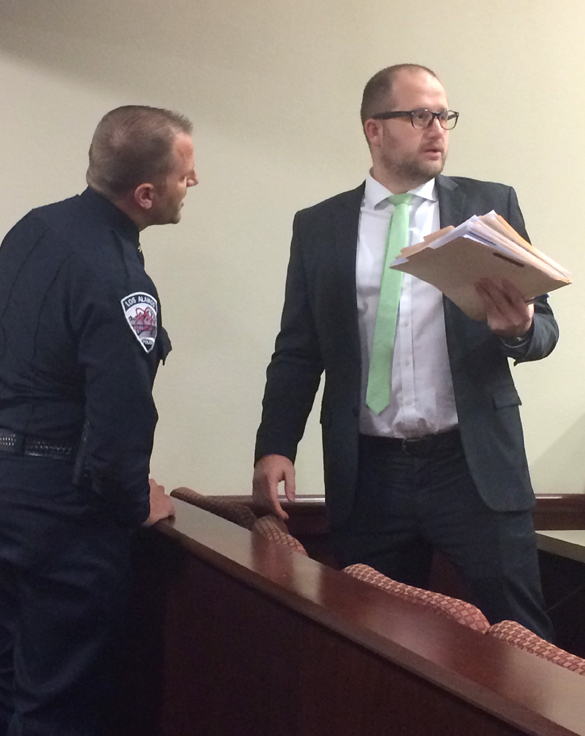 He said his concern is for LAPD officers responding to his residence, to the victims of these calls, and that having officers and mentors “having one-on-ones with him” has not worked.

“This last summer when I went to his residence, another youth I had coached in football had overdosed on methamphetamine, and obviously didn’t die. We knew we had to step it up with the LAPD to take care of the situation,” Morris said. “I believe his behavior has brought down our community and that his residence was a haven for stolen property, drugs, and enough is enough!”

Ellington gave Krepps credit for time served for all but 42 months of the sentence, with three years to be spent in prison, adding that with good behavior, he could be out in about 18 months or a little longer.

Morris told the court that he had known Krepps since middle school as he was the school resource officer when he first started with the department 13 years ago and that he had “followed that group of students up”. Morris said he had stood before courts many times and advocated for youth to get another chance.

“The problem with Mr. Krepps is that he spent nearly 500 days in our jail. He has been arrested nine times with 16 additional charges filed for a total of 25. He’s been charged with public affray, defrauding an innkeeper, criminal damage to property times three, battery against a household member times three, assault and attempted battery, robbery, multiple warrants, conspiracy, receiving stolen property of a firearm and most recently trafficking methamphetamines. At his most recent address the police were called there 34 times in the last year and a half for domestic disputes,” Morris said.

He said his concern is for LAPD officers responding to his residence, to the victims of these calls, and that having officers and mentors “having one-on-ones with him” has not worked.

“This last summer when I went to his residence, another youth I had coached in football had overdosed on methamphetamine and obviously didn’t die. We knew we had to step it up with the LAPD to take care of the situation,” Morris said. “I believe his behavior has brought down our community and that his residence was a haven for stolen property, drugs, and enough is enough!”

Osborn said that while Krepps had completed drug court, it was back in 2013 and that Krepps has “picked up quite a few cases since then”.

“I know the court is well aware of his history and now the court is more aware of his influence within that community. The state has an obligation here, Judge, to ask for five years, the maximum allowable sentence under the plea and disposition hearing,” Osborn said. “We don’t know what else to do but to ask for five … he will be out with credit for presentence confinement in a relatively quick time considering what he will be doing and that should give him time to complete another treatment plan in the Department of Corrections.”

Defense Attorney Tyr Loranger said Krepps was going to ask for credit for time served and that he receive a suspended sentence in this matter.

“While I respect the litany of offenses the officer presented to the court, I’ve represented Mr.Krepps in the vast majority of those incidents and most of those cases were frankly dismissed. I’m going to urge the court to only take into consideration only the convictions at this time, the actual convictions that are on record”, he said. “Mr. Krepps has been in custody approximately six months at this time, and while I’m sure the court will consider the fact that he received a dishonorable discharge from probation last time, it should be brought to the court’s attention that he did complete the drug court program.”

He said the court should  take into account “the considerable progress”Krepps has made since he was incarcerated in this matter. He added that in addition to anger management, Krepps had complied counseling requirements and that his counselors had agreed to continue meeting with him if he was released.

“Most compelling in this case is the detention center and the detention officers, with whom Mr. Krepps has been interacting during his period of incarceration, have very favorable reports of the progress he has made,” Loranger said.

He gave the court a letter from Sgt. Chris Romero indicating he is doing quite well despite the fact that he struggled at first with behavior issues, and added that since Krepps was sent for his diagnostics, he has “shown quite a difference in his attitude and work ethic.”

Loranger then asked to discuss a matter with Osborn and Ellington off the record. Afterwards, he said that from his own personal point of view, when he first met Krepps, he had what he could only refer to as “a denial attitude”.

“But since then he has had counseling, and most significantly his meds have shifted; he is on Prozac, which Mr. Krepps has reported to me has helped him immensely, and I can report from an objective point of view, Mr. Krepps is now engaging, he makes eye contact, he takes responsibility for his actions and I think the court should take into consideration the considerable progress that he’s made,” Loranger said.  “I understand that he has a history before the court but nevertheless I don’t believe under these circumstances it would be appropriate to send Mr. Krepps to prison.”

Loranger added that the DOC diagnostician recommended Alcoholics Anonymous or Narcotics Anonymous for Krepps, which he felt should indicate to the court that his drug problem “is not as uncontrollable as the state would lead you to believe”. He said obviously the recommendation is that if he can’t do the outpatient program then inpatient would be appropriate.  He said the second recommendation in the diagnostics report was that Krepps remain gainfully employed and that his employers were present in court and would like to make a statement. Both testified that they wanted him back. To work as a grounds man and maintenance person.

Ellington told them Krepps is an enigma “because he seems to have the ability to be law-abiding and hold down a job then at the same time, I see all this which was happening contemporaneously”.

Loranger said his last recommendation “is that he complete a course in parenting classes”.  “With the proper follow-up I believe Josh, if given a chance, could turn it around and become a contributing member of society,” he said.

Given a chance to make a statement, Krepps said he has dealt with pain and anger for a very long time and that his behavior “is embarrassing”. He said that going to the diagnostic center has really opened his eyes and that that’s not where he wants to be.

“All these people, my bosses, my girlfriend, everything, even the CO’s have been more than helpful to me. I have been seeing the anger management, I am truly sorry to the LAPD for my actions. I was stupid. If given the opportunity to go on probation I want to show them that I can be a law-abiding citizen and show my family that I’m not just another failure,” Krepps said.

Ellington told Krepps, “You have people from the community that are willing to come to court and testify for you, because you have shown them one part of your personality that’s positive and then the other side of that is a one-man crime wave. You’ve been doing this for a long time. In reading the evaluation, some of the psychological points, it makes your behavior make a little more sense, you have definite features of PTSD, borderline personality disorder, antisocial personality disorder, and then the drugs in on top of all that. You’re dangerous, you’re dangerous to be around, you’re dangerous to the community”.