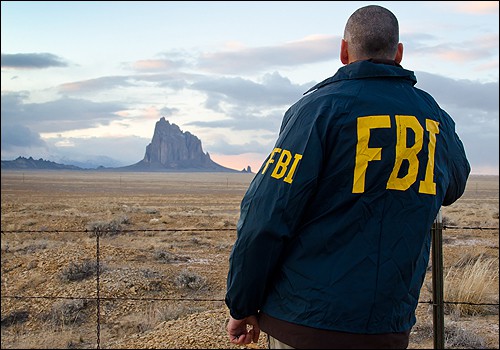 A special agent overlooks the Shiprock land formation on the Navajo Nation. The reservation, the largest in the country, is one of about 200 federally recognized Indian reservations where the FBI has investigative responsibilities. Courtesy/FBI

Driving along a remote dirt road on the Navajo Reservation in New Mexico recently, a rancher crested a ridge and noticed two animals intent on something in a nearby ditch.

As he approached, one of the scavengers loped away—the other looked up, its mouth glistening with blood.

The rancher guessed one of his sheep had been attacked, but he soon discovered something much different: the discarded body of a murder victim.

It was going to be another busy day for our agents in Indian Country.

By law, the FBI is responsible for investigating the most serious crimes within Indian Country—homicide, child sexual assault, and violence against women among them.

The numbers of such offenses are striking: approximately one out of every four violent crimes prosecuted federally by the Department of Justice occurs on Indian reservations.

Working in Indian Country, as we call it, often means operating in isolated, forbidding terrain where cultural differences abound.

Some older Native American people, for example, do not speak English.

Dwellings may lack electricity or running water. On many reservations there are few paved roads or marked streets.

Agents might be called to a crime scene in the middle of the night 120 miles away and given these directions: “Go 10 miles off the main road, turn right at the pile of tires, and go up the hill.”

In some areas, crime scenes are so remote that cell phones and police radios don’t work.

Investigators must also deal with the emotional strain of the work—the brutality and frequency of the crimes can take a toll.

“The work our people are doing on the reservations is truly front-line,” said Carol K.O. Lee, special agent in charge of our Albuquerque office. “Agents have to be independent and adaptable to get the job done, because even with the excellent help of our law enforcement partners like the Bureau of Indian Affairs, the territory is so vast you rarely have the resources you need.”

Nationwide, the FBI has investigative responsibilities for about 200 federally recognized Indian reservations. 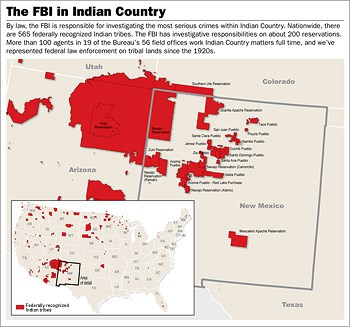 In New Mexico, home to a portion of the Navajo Nation—the largest reservation in the country, occupying an area bigger than the state of West Virginia—agents investigate cases against a backdrop of majestic mesas and stark beauty.

The murdered man mentioned above was found eight miles from the nearest paved road, not far from the landmark Shiprock formation sacred to the Navajo people.

“The victim went out drinking with a bunch of guys and ended up dead,” said Special Agent Mike Harrigan, who supervises an Indian Country squad.

The body has been identified and the death has been ruled a homicide, Harrigan explained, and investigators are tracking down leads.

He noted that if the rancher hadn’t happened by, or the body had been dumped a few feet further from the road, “there is a good chance the victim never would have been discovered. Unfortunately, killings like this are all too common in Indian Country.”

Despite the difficulties they face, the dedication and commitment of FBI personnel in Indian Country has helped make Native American communities safer, said Special Agent in Charge Lee.

“We have a long way to go, but we are definitely making a difference.”

Next: Investigators, ambassadors, and role models. 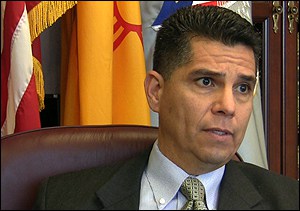 Ken Gonzales, New Mexico’s U.S. Attorney, points out that there are “a lot of good things happening in Indian Country, a lot of efforts by our Native-American leaders to bring jobs to the reservations and to improve access to education.”

But the state’s top law enforcement officer is also painfully aware of the “gravity of violence” seen on Indian reservations. “It’s a kind of brutality that I don’t think a lot of people understand completely,” he said. “It’s really quite startling.”

Homicides, child sexual assaults, and domestic violence against women are commonplace, Gonzales said. “It’s widely known that Native American women suffer violent crime at a rate three and a half times greater than the national average. One third of all Native American women will be raped in their lifetimes. So these are serious issues.”

Gonzales said that since becoming U.S. Attorney in 2010, “I’ve put the work of Indian Country very high on my list of things to get done. I created a stand-alone section—we call it our Indian Country Crime Section—and we’ve stocked it with some of our best and brightest Assistant U.S. Attorneys. Their job is to do nothing but Indian Country work.”

The prosecutors work closely with the FBI. “We maintain a very regular and open line of communication with the agents working in Indian Country,” Gonzales said. “So it makes for a very good working relationship. The FBI has a very strong presence in many of these communities. They have been doing very difficult work, and doing it in a very good way, for many years. My office relies tremendously on their expertise.”