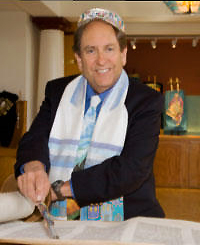 Imagine “Raiders of the Lost Ark,” minus the Hollywood special effects and you’ll come close to the story of the Holocaust Torah Scroll.

How was the Torah found? How was it liberated? How did it find its way from its hiding place to London, England, and from there to, of all places, Santa Fe?

Rabbi Marvin Schwab will tell the fascinating tale of this scroll’s journey, its near destruction, and now its restoration at 4 p.m. Sunday, Jan. 26 at White Rock Presbyterian Church, 310 Rover Blvd. The public is invited to attend.

The Torah is the first part of the Hebrew Scriptures. It is hand-written on parchment by Soferim (expert scribes.) The process takes about one year.

Czech Memorial Scroll No. 426 came from the town of Mlada Boleslav, a town approximately 40 miles north of Prague, Czech Republic, and was written circa 1890. It served the Jewish community in Czechoslovakia for many years until the Nazi occupation in 1938-39.