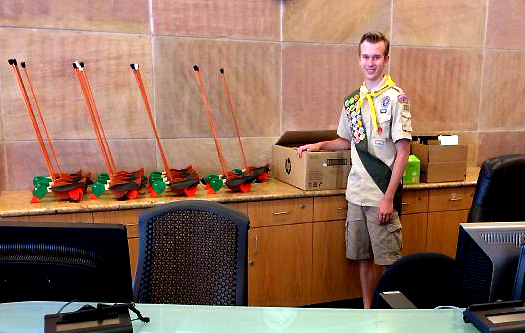 Eagle Scout recipient Joshua A. Ramsey, a member of Boy Scout Troop 222 of Los Alamos with some of the 44 wooden toys he designed, finished and delivered to UNM Carrie Tingley Children’s Hospital in Albuquerque. Courtesy photo

Joshua A. Ramsey, a member of Boy Scout Troop 222 of Los Alamos, has earned the highest honor bestowed by the Boy Scouts of American, the rank of Eagle Scout.

He received the award in the Boy Scout Eagle Court of Honor ceremony Feb. 21, 2017 at the Los Alamos Church of Jesus Christ of Latter-day Saints. He also received a Certificate of Recognition from The Military Order of the World Wars.

Ramsey is a senior at Los Alamos High School and a member of the high school lacrosse team. He started out in the Boy Scout program as Cub in 2007. In 2011, he earned the Arrow of Light and transitioned into Troop 222. As a member of Troop 222, Ramsey has held a variety of troop positions including financial officer, patrol leader and quartermaster.

Ramsey’s favorite scouting activities were the high adventure activity at Philmont Scout Ranch and the Kodak Challenge, a 202-mile bicycle ride adventure through parts of Colorado. His favorite merit badge was “Wilderness Survival”.

For his Eagle project, Ramsey designed, finished and delivered 44 wooden toys for the children of the University of New Mexico Carrie Tingley Children’s Hospital in Albuquerque. The toys included push ducks as well as cars and trucks, which were modeled after the Ford Mustang and 1940 Ford F150 trucks respectively. He would like to thank the following local merchants, Finishing Touch, Metzger’s Do-It Best and Los Alamos Home Improvement ACE Hardware for their help with his project.

Ramsey earned 21 merit badges on his journey to Eagle and has attended camps at Gorham Scout Camp and Cris Dobbins.

Ramsey, the son of Gerald and Marilyn Ramsey of Los Alamos, is planning on attending college in the fall and majoring in Mechanical Engineering.