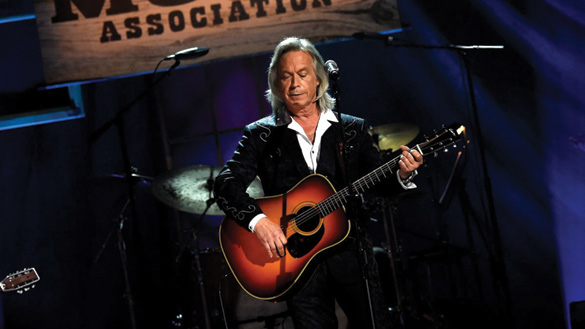 Two-time Grammy-winning singer and master songwriter Jim Lauderdale is both a “songwriter’s songwriter,” who’s written/co-written many modern classics for iconic artists, as well as an intuitive sideman, who’s enhanced the music of a bevy of esteemed musicians.

Lauderdale will be in concert at 7 p.m. today at Ashley Pond Park. Also on the bill is local bluegrass band Higher Ground. The concert is part of the free Los Alamos Summer Concert Series.

As a solo artist, since 1986 up until now, he’s created a body work spanning 28 albums of imaginative roots music, encompassing country, bluegrass, soul, R&B and rock. Along the way he’s won awards, garnered critical acclaim, and earned himself an engaged fan base.

This profound entry in Jim’s artistic continuum represents an immersive journey into the heart of Americana music different than any of Jim’s previous work.

Jim recorded each album in hallowed halls with some of the finest and most respected purveyors of these soulfully indigenous sounds. Both albums feature roots savants Luther and Cody Dickinson of the North Mississippi Allstars playing. Vol. 1 Memphis was tracked at the legendary Royal Studios, home base for producer Willie Mitchell and Hi Records, and where classic Al Green songs such as “Tired Of Being Alone” and “Let’s Stay Together” were cut, along with R&B smashes from Ann Peebles, Otis Clay, and Bobby “Blue” Bland.

Jim produced the album with Luther and Boo Mitchell, calling on some of Memphis’ finest musicians including Charles and Leroy Hodges, Alvin Youngblood Hart and others, to capture the city’s unique sound. Vol. 2 Nashville, produced by Jim and Luther, was tracked at the historic Nashville Victor Studio A, a treasure of recording history; the site of iconic sessions by such artists as Dolly Parton, Waylon Jennings, Roy Orbison, Elvis Presley, George Jones, among many others.

Jim’s recording was a celebration of the studio beingsaved after a prolonged fight to keep its doors open. Soul Searching: Vol. 1 Memphis/Vol. 2. Nashville (Sky Crunch Records) is a 26-song release available as a double album, and, conveniently, as individual albums.

He also co-hosts a weekly radio show on SiriusXM with Buddy Miller, “The Buddy & Jim Show,” which NPR’s Fresh Air described as “…highly entertaining…” He is also co-host of Music City Roots, the weekly live and radio, podcast and PBS series.

In 2014, the documentary, Jim Lauderdale: The King of Broken Hearts, was released, celebrating Jim’s unconventional career.

In 2010, Jim was honored with the SESAC Inspiration Award. Most recently, he received the prestigious American Eagle Award from the National Music Council along with Kris Kristofferson.

His musical influences, who include the legendary Dr. Ralph Stanley and George Jones, can be heard in his songs with his unique sense of melody and lyrical expertise. He won his first Grammy Award in 2002 with Dr. Ralph Stanley for Lost in the Lonesome Pines (Dualtone) and then for The Bluegrass Diaries (Yep Roc) in 2007. In addition to previously mentioned releases, as a performer Jim is credited with production, writing and collaborating on over two dozen albums including Wait ‘Til Spring (SkyCrunch/Dualtone 2003) with Donna the Buffalo and Headed for the Hills (Dualtone 2004), his first total project with Robert Hunter, Planet of Love (Reprise 1991), Pretty Close to the Truth (Atlantic 1994), Every Second Counts (Atlantic 1995), Persimmons (Upstart 1998), Whisper (BNA 1998), Onward Through It All (RCA 1999), The Other Sessions (Dualtone 2001), The Hummingbirds (Dualtone 2002), Bluegrass (Yep Roc 2006), Country Super Hits, Volume 1 (Yep Roc 2006), Honey Songs (Yep Roc 2008), Could We Get Any Closer? (SkyCrunch 2009), Patchwork River (Thirty Tigers 2010), Reason and Rhyme  (Sugar Hill Records 2011), Buddy and Jim (2012), Black Roses (2013) and Blue Moon Junction (2013). I’m A Song (2014).