Jewish Perspectives On Termination Of Pregnancy 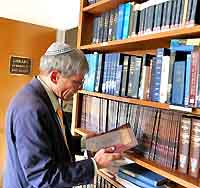 Rabbi Jack, who returned to Los Alamos this spring following a few years in New York, explained that the Jewish perspectives are heavily nuanced; some situations require that a pregnancy be terminated, others permit termination, and yet others prohibit abortion.

This complex, contemporary topic can be informed by examining the Jewish sources; attendees at the Jewish Center were able to see the two full cartons of books assembled for the talks.

Texts providing insight into Jewish perspectives on abortion include materials from all three parts of the Jewish Bible; from ancient expansions on those biblical passages; from the Talmudic literature and sections from a medieval Jewish code of law; from the Jewish mystical tradition; and from questions and answers posed to rabbis on contemporary issues that may not be directly addressed in the ancient texts, such as use of electricity or airplane travel.

One such question-and-answer, composed in the Kovno ghetto during the Nazi occupation, is about abortion. The Nazis had ordered that pregnant Jewish women in this Lithuanian ghetto would be immediately executed, and rabbinical ruling was that in order to save the woman’s life, a pregnant woman was permitted to have an abortion.

Future adult education programs at the Los Alamos Jewish Center will address other contemporary topics such as gun control, and separation of church (synagogue) and state, using Jewish texts as primary resources.