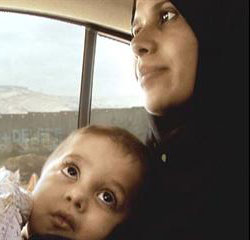 The award-winning Israeli documentary film, Precious Life, is coming to the  Reel Deal Theater for a one-time screening at 4 p.m. Sunday, March 9.

Precious Life follows the real-life story of a Palestinian baby with a rare immune deficiency disorder, and the Israeli doctor who hopes to save the baby’s life. It is an up-close and personal story set against the larger backdrop of the Israeli-Palestinian conflict.

The film was featured at the Telluride, Toronto and Mill Valley Film Festivals, and won the Ophir Award (the Israeli Academy Award) for Best Documentary. It has garnered accolades from The New York Times, Wall Street Journal, and Chicago Tribune, and was described by film critic Thomas Friedman as “a story of compassion among enemies and cruelty among neighbors.”

Los Alamos was chosen for the Santa Fe Jewish Film Festival’s first presentation outside of the City Different, because of the vibrant and active cultural community on the Hill, Festival Director Marcia Torobin said. “It’s an ideal environment for expanding the reach and enjoyment of the eclectic mix of documentaries and first run features the Festival presents.”

Los Alamos playwright Robert Benjamin viewed Precious Life when it screened in Santa Fe last spring, and said he is anxious to see it again at the Reel Deal. The film, “…transforms one of the most difficult problems of our times into a personal challenge of healing and compassion,” Benjamin said.

Precious Life vividly illustrates the complexities of the Middle East, the impact on individual lives and the need on both sides for security. The film’s director, journalist Shlomi Eldar, is best known in Israel as the Channel 10 news correspondent for Gaza, which he has covered for 20 years. An interview with Eldar from Israel via Skype will follow the screening.

Advance are $12 ($10 for full-time students). They are available at the Reel Deal Theater or on the Santa Fe Jewish Film Festival’s website www.SantaFeJFF.org/LosAlamos. Tickets include a post-film reception and light refreshments at the theater sponsored by the Los Alamos Jewish Center. If available, tickets at the door are $15.

The Santa Fe Jewish Film Festival, launched in 2010, brings films that foster an understanding of Jewish culture, history, religion and/or identity to New Mexico audiences. Selections are award-winning features and documentaries that have premiered at major film festivals such as Cannes, Venice, Sundance, Tribeca and Jerusalem.

While each film has a Jewish connection, the larger themes have general community appeal. SFJFF screenings are preceded or followed by a speaker, interview, discussion, or other special programming. For more information and tickets, visit http://www.santafejff.org/LosAlamos/. Advance purchase is highly recommended, as shows often sell out.