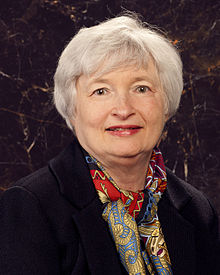 WASHINGTON–Monday, Sen. Tom Udall joined the Senate in confirming Janet Yellen to serve as Chairwoman of the Federal Reserve. He issued the following statement:

“Today’s vote was a historic moment for the Federal Reserve and for our nation. I look forward to seeing Dr. Yellen become the first woman to lead the Federal Reserve Board. As Vice Chair of the Fed, Dr. Yellen has proven herself to be a thoughtful and extremely effective leader,” Udall said. “I look forward to her experienced hand and strong voice for working families as she takes its helm. I am also pleased that our efforts to reform Senate rules allowed a swift up-or-down vote on Dr. Yellen. The Senate is now able to do its job with respect to nominees without the partisan gridlock and obstruction that have become the norm in the Senate.”

Yellen was an assistant professor at Harvard in 1971–76 and an economist with the Federal Reserve Board of Governors in 1977–78. Beginning in 1980, Yellen has been conducting research at the Haas School and teaching macroeconomics to full-time and part-time MBA and undergraduate students. She is now a Professor Emeritus at the University of California, Berkeley’s Haas School of Business, where she was named Eugene E. and Catherine M. Trefethen Professor of Business and Professor of Economics. Twice she has been awarded the Haas School’s outstanding teaching award.

Yellen served as chair of President Bill Clinton’s Council of Economic Advisers from Feb. 13, 1997 to 1999, and was appointed as a member of the Federal Reserve System’s Board of Governors from 1994 to 1997. She has taught at Harvard University and at the London School of Economics. Yellen serves as president of the Western Economic Association International and is a former vice president of the American Economic Association. She was a fellow of the Yale Corporation.

From June 14, 2004, until 2010, Yellen was the President and Chief Executive Officer of the Federal Reserve Bank of San Francisco. She was a voting member of the Federal Open Market Committee (FOMC) in 2009. Following her appointment to the Federal Reserve in 2004, she spoke publicly, and in meetings of the Fed’s monetary policy committee, about her concern about the potential consequences of the boom in housing prices. However, Yellen did not lead the San Francisco Fed to “move to check [the] increasingly indiscriminate lending” of Countrywide Financial, the largest lender in the U.S.

In a 2005 speech in San Francisco, Yellen argued against deflating the housing bubble because “arguments against trying to deflate a bubble outweigh those in favor of it” and predicted that the housing bubble “could be large enough to feel like a good-sized bump in the road, but the economy would likely be able to absorb the shock.”In 2010, Yellen told the Financial Crisis Inquiry Commission that she and other San Francisco Fed officials looked for guidance from Washington because “she had not explored the San Francisco Fed’s ability to act unilaterally,” according to the New York Times. Yellen conceded her previous misjudgment of the housing crisis to the Commission: “I guess I thought that similar to the collapse of the stock market around the tech bubble, that most likely the economy could withstand [the housing collapse] and the Fed could move to support the economy the way it had after the tech bubble collapsed.”

In July 2009, Yellen was mentioned as a potential successor to Ben Bernanke as chair of the Federal Reserve System, before he was renominated by Barack Obama. She later told an interviewer that such reports were unfounded, and originated in the United Kingdom.

On Sept. 17, 2013, a day after it was confirmed that Lawrence Summers was no longer likely to be appointed to succeed Ben Bernanke, Yellen was widely recognized as the next top pick by U.S. Senate Democrats.

On Oct. 9, 2013, Barack Obama nominated her as the first woman chair of the Federal Reserve, saying, “She had sounded the alarm bell early about the housing market bubble and excesses in the financial markets before the recession. She calls it like she sees it.”