Izraelevitz: What Dinosaurs Taught Me About Parenting 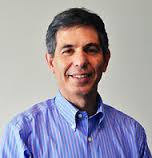 By DAVID IZRAELEVITZ
Los Alamos
My wife and I were in Albuquerque one early Sunday morning, and she suggested we eat at the The Grove on Central Avenue, a very nice place featuring fresh ingredients, novel variations on breakfast items, and the location of a gruesome poisoning in the final season of Breaking Bad.
There were no poisonings while we were there, but as we lounged in the patio, I noticed a young family at a neighboring table featuring a toddler who had brought a toy dinosaur, and had accommodated his friend in the adjacent chair.
That scene brought back memories to Terry and I of the central role of dinosaurs as we raised our children, especially when they were about that age. We watched Barney the Friendly Dinosaur on television, we saw many movies about dinosaurs (especially riveting sequel after sequel of Land Before Time), we read books about dinosaurs, some factual books and some that perpetuated the caveman-befriends-a-dinosaur plot-line. My kids even had underwear featuring such stars as Brontosaurus, Tyrannosaurus, and Stegosaurus, and they were proud to show you how good they were at dinosaur identification, even if the pants had to drop in order to recite the full inventory.
Why are children fascinated by dinosaurs? Well, why are children fascinated by all sorts of things that to an adult are dangerous or mundane or dirty or irrational? It is because they see a different world. I learned a little about this playing checkers with my oldest son. Joe loved a special checkers game where the basic pieces were brontosaurs and the board made of rocks arranged over a lava field. When a piece was kinged, you got to replace the Brontosaurus by a Tyrannosaurus Rex, with all the attendant privileges thereof.
While visiting grandparents one summer, I offered to play checkers with Joe, explaining that the traditional pieces led to the same game. No, he argued indignantly, it is completely different. There are no lava fields that you have to avoid, no fights between dinosaurs, no triumphant elevation from meek vegetarian to ravenous meat-eater. The abstract rules of checkers, even whether he won or lost,were incidental parts of the game. The fun was to enter a magical world populated by fantastic creatures.
Children may not think like adults, but sometimes it is the adult point of view that is blurred and misses the particular detail.
Like many parents, I often fell into the trap of introducing my world view to my children prematurely, with its geography of competition, injusticesand ambiguities. Instead, I should have appreciated more how different the world looks when you are only a few feet tall, when bugs and flowers and green grass and wet sand are closer to your touch, closer to your world, easier and more important to appreciate. Maybe there is too much emphasis in learning to read and count, and not enough on learning to share and hug and run barefooted. Allthese skills are necessary for a happy life, and there is time enough to learn that long alphabet.
Our toys have been gathered and stored in our basement, waiting for some new kids to rediscover and enjoy. Among them, I expect to find a special game of checkers, the one with peculiar rules that make all the difference in the world.
Previous
Next
Menu
Los Alamos
55°
Mostly Cloudy
7:22am6:16pm MDT
Feels like: 54°F
Wind: 11mph S
Humidity: 26%
Pressure: 29.72"Hg
UV index: 4
SunMonTue
57/27°F
32/21°F
30/25°F
Weather forecast Los Alamos, New Mexico ▸
Previous
Next