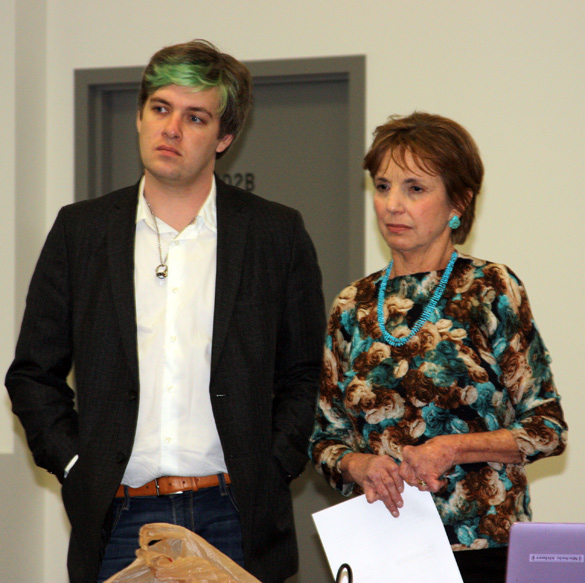 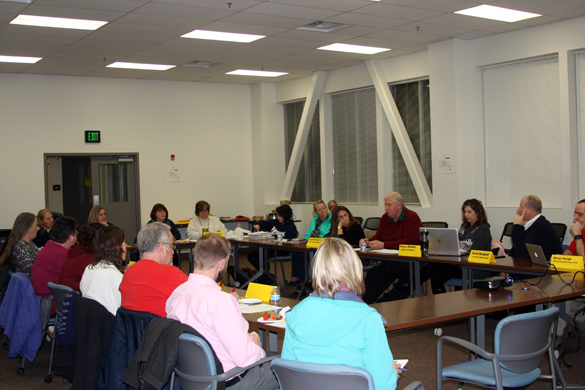 Members of the JJAB Board learn about the XQ Super School project during the January meeting. Photo by Bonnie J. Gordon/ladailypost.com
By BONNIE J. GORDON
Los Alamos Daily Post

XQ Super School is a movement started by Laurene Powell Jobs, wife of the late Steve Jobs. The purpose is to create a vision of education in the 21st Century, specifically to redesign the American high school.

In September, Powell Jobs issued a call for entries in a contest that will award $50 million to at least five school districts that submit winning proposals designed to overhaul education in their district. The Los Alamos XQ Super School Team will submit its proposal Feb. 11. Semifinalists will be announced in March.

“XQ Institute has a great belief in people coming together,” Altherr said. “We’re still using the same model for high school we had 100 years ago. America is falling behind.

The goal of the Institute and of the contest they are sponsoring is to completely change the model for public high school, Altherr said. The culture of work has changed significantly since the beginning of the last century, moving from a network community from a top down structure and into an age of innovation, she said.

“People are ripe for this,” she said.

Daniel addressed why the group feels change is so urgent.

The recent Mental Health Survey, conducted by the School District’s Mental Health Design Team, at the high school and middle school, found that more than 700 students identify the homework load as their main stresser, Daniel said. More than 375 sited boredom as a major stresser. Although Los Alamos is one of the top performing schools in the nation, almost half of the students surveyed site anxiety as a mental health issue, Daniel said.

“We’re keeping students busy, but we’re not keeping them engaged,” Daniel said. “The system isn’t serving our kids. We don’t have to do business as usual. We need to make changes now. The time is right in Los Alamos. We have the right players in the right places to make a change. Both the School Board and the District Administration are committed to making changes.”

The presenters stressed that their vision goes far beyond one contest.

“XQ is just one word in a greater conversation going on in Los Alamos,” Daniel said. “The XQ team’s passion is for change,” Daniel said.

The group calls their plan Los Alamos Odyssey High School. It uses project-based learning to re-focus the purpose of high school into helping students find “a reason to be,” Altherr said.

“All aspects of life need to be blended into a harmony: knowledge, skill, passion and talent,” she said.

The plan would schools create schools. Self-selected groups would work in the real world with the entire community.

“We want students to be able to navigate the world with their passions intact,” Altherr said.

Team member Bill Hargraves who serves on the Los Alamos School Board seeks a school model that “challenges the dynamic between teaching and learning.” In the information age, what students need is to “learn how to learn,” he said.

One tool the group would like to see used in the high school is Dialectical Behavioral Therapy (DBT). The DBT model teaches a common emotional language and binds passion to knowledge, Daniel said.

The team gathered ideas from students in a number of ways, including meetings with students at the Teen Center and a high school assembly, where students jotted their ideas down on large sheets of paper for later analysis.

The group also seeks input from teachers. Daniel said teachers are frustrated by paperwork and testing and are losing their passion for their job.

“I’d like to see what teachers would do with a system they really loved,” he said.

Whatever the outcome of the contest, the XQ Super School Team will remain focused on changing education in Los Alamos, Daniel said.

“We want to hold discussion groups and continue to problem solve about what’s in the way of change,” Daniel said. “We invite the community to join us.”