‘It’s All About You’ Offers Salon Services With A View 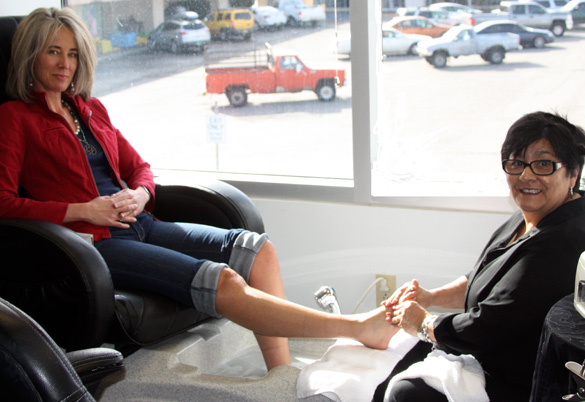 Client Bettina Hehlen gets a foot massage from ‘It’s All About You’ owner Pat Archuleta at 942 Central Ave. in the Community Bank Building. Photo by Bonnie J. Gordon/ladailypost.com
By BONNIE J. GORDON
Los Alamos Daily Post

Pat Archuleta has been doing nails for 16 years, but she’s never been happier with her salon space than she is now. Archuleta moved her business, It’s All About You, to the second floor of the Community Bank Building two years ago.

Formerly located near the DMV, on what has been termed on occasion, Salon Row, Archuleta said her new digs are serene and quiet, as well as sporting a nice view. Archuleta works alone in her salon and she said the mix of socializing with clients and having some alone time work well for her.

“I have many loyal clients who have been with me for years,” Archuleta said. One longtime client, Julie Lanterman, said she loves the atmosphere at It’s All About You.

Archuleta said being near her grandchildren is what brought her to Los Alamos 10 years ago. She’s a native New Mexican who grew up in Clayton. Archuleta also is a jeweler and her work is on display at the salon.

“Someday, I’d like to have a big enough space to show other people’s work, too,” she said.

It was her love of color that attracted Archuleta to her career. “I like working with clients in a salon atmosphere,” she said. “I love making women feel good and look beautiful!”

It’s All About You is open 9 a.m. to 6 p.m., Monday through Friday by appointment. If it’s a special occasion or someone can only come at night or on a weekend, Archuleta said she was willing to work with them to find a workable time. Call 505.661.0200 to schedule an appointment.