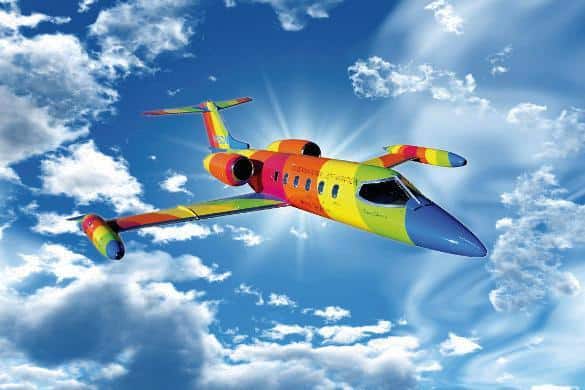 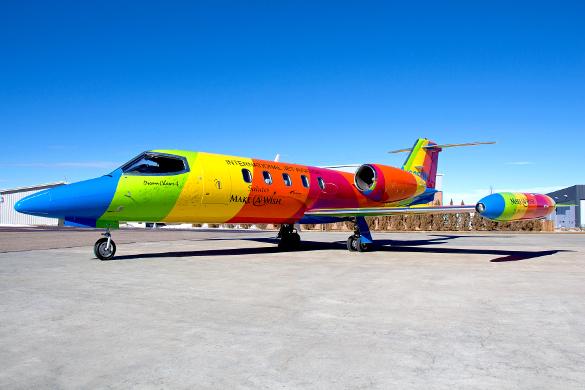 International Jet Aviation’s ‘Dream Chaser 5’, the eight passenger LearJet model 35 is parked today at Atlantic Aviation in Albuquerque. Courtesy photo
IJA News:
International Jet Aviation is honoring Make-A-Wish New Mexico and its wish kids today with scenic flights over Albuquerque in its specially designed “Dream Chaser 5”, eight passenger LearJet model 35 at Atlantic Aviation in Albuquerque.
International Jet Aviation will provide flights for ten New Mexico wish children: five who have had their wishes granted by Make-A-Wish New Mexico and five in the wish granting process.
This is a part of International Jet Aviation’s tour across the US to honor the more than 35,000 volunteers of Make-A-Wish, who have helped grant more than 300,000 wishes since the inception of the organization in 1980.
“We are thrilled that International Jet Aviation has chosen to stop in Albuquerque and include our wish kids on their tour. We are grateful for partners like International Jet Aviation who make it possible for us to grant life-changing wishes for children with critical illnesses,” said Make-A-Wish New Mexico President & CEO Sara Lister. “This is also a reminder that many wishes involve travel and people can help support our wish kids’ travel by donating airline miles on our website at www.newmexico.wish.org/ways-to-help/giving/airline-miles.”
International Jet Aviation is an aircraft charter and management company that operates 15 jet aircraft based in Denver, Colo. They are donating the use of the rainbow colored LearJet to salute Make-A-Wish and their volunteers.
From time to time when one of their LearJets needs a new paint job, International Jet Aviation paints over the old colors to transform the aircraft into the most colorful airplane in the world. The rainbow LearJet is then christened the “Dream Chaser” and is flown to different cities to promote the important work of Make-A-Wish and to salute the many volunteers of this great organization.
While in each city, the “Dream Chaser” will take some Make-A-Wish children on a scenic flight in the skies over their town. The flight serves to give these special kids a lift and brighten their day with their own magic carpet ride in a private jet painted just for them.
The kids also get to sign their name on the side of the jet.
International Jet Aviation, which is celebrating its 40th anniversary, started doing these Make-A-Wish flights in 1990. Since that time, there have been four “Dream Chaser” airplanes and the company has flown more than 250 “Wish Kids” bringing smiles to these special children and their families in the United States.
The aircraft being used this time can fly at speeds of more than 500 miles per hour and at altitudes up to 45,000 feet. It is based in Centennial, Colo. and is chartered by individuals and corporations throughout North America. It will be in this special rainbow paint scheme for only 10 days due to the large expense involved.
This project is a volunteer nonprofit effort and many of the employees of International Jet Aviation were involved in one way or another. It would not be possible if not for the help of the company pilots, mechanics, dispatchers as well as some other outside individuals and companies who help with fuel costs, painting and other support.
“This is a chance for our employees to give back something to the community,” International Jet CEO Lynn Krogh said. “It is really worth while to know we have brought some extra fun and excitement to the kids of Make-A-Wish. The organization has done so much good in the more than three decades since they started, and they continue to make wishes come true for some very special children.”
Menu
Los Alamos
55°
Fair
5:50am8:25pm MDT
Feels like: 55°F
Wind: 0mph W
Humidity: 56%
Pressure: 30.19"Hg
UV index: 0
SatSunMon
75/54°F
68/55°F
66/55°F
Weather forecast Los Alamos, New Mexico ▸