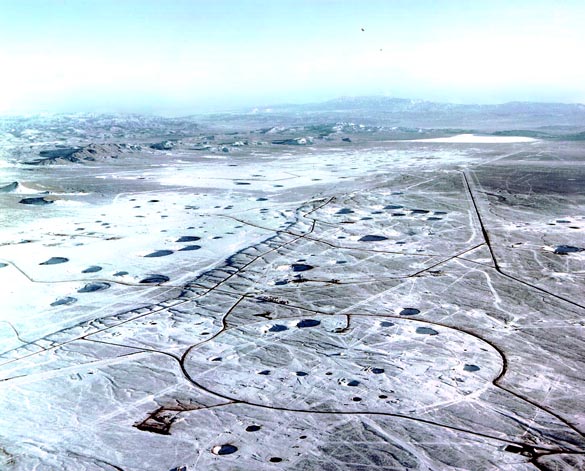 North end of Yucca Flat, where most tests have been conducted. Courtesy/wikipedia

The visit provided an up-close demonstration of NNSA’s science-based Stockpile Stewardship Program (SSP), through which the U.S. is able to maintain the safety, security, and reliability of its nuclear weapons stockpile without nuclear explosive testing. The tour also showcased NNSA expertise in applying world-class science, technology, and engineering to various nuclear security missions, including technical support for Comprehensive Nuclear-Test-Ban Treaty (CTBT) methodologies. NNSS—a former nuclear explosive test site until a moratorium on nuclear explosive testing was established in 1992—now serves as an experimental test bed and training ground for broad nonproliferation and national security missions beneficial to both the U.S. and the international community.

“We are pleased to be able to host international diplomats at NNSS to discuss the history of the U.S. nuclear program and demonstrate how our former nuclear explosive test site has been transformed into a national and international asset supporting a wide variety of nuclear nonproliferation and national security missions,” said Anne Harrington, NNSA Deputy Administrator for Defense Nuclear Nonproliferation. “Through transparency visits like this week’s visit—and by hosting training activities—we hope to build confidence within the international community in U.S. nonproliferation and arms control commitments.”

“We hope the diplomats visiting Nevada will come away with a better appreciation for our commitment to CTBT goals and objectives through the world-class science and technology at our national laboratories and here at NNSS,” said Brig. Gen. Michael Lutton, NNSA Principal Assistant Deputy Administrator for Military Application, who co-hosted the event.

In addition to NNSA’s Harrington and Lutton, the U.S. was represented by Ambassador Laura Holgate of the U.S. Mission to International Organizations in Vienna (UNVIE); Anita Friedt, Principal Deputy Assistant Secretary in the Department of State’s Bureau of Arms Control, Verification and Compliance; and Craig Campbell of the Department of Defense’s Office of Threat Reduction and Arms Control.

Although the CTBT has not yet entered into force, it provides a framework for preparing to conduct on-site inspections to certify CTBT compliance and verify if a suspicious event was a nuclear explosion. The CTBTO PrepCom selects experts from partner states to lend their expertise as surrogate inspectors. Recently, a total of 80 international experts were chosen by the PrepCom to participate in the third on-site inspection training cycle as new trainees. Selected trainees will undergo a rigorous set of classes, workshops, and exercises to gain the skills required to conduct inspections.

The United States fully supports the development of a robust on-site inspection capability. U.S. support to the CTBTO PrepCom most recently was demonstrated when NNSA hosted the Nevada Familiarization Activity at the NNSS in May 2016, involving 50 international on-site inspection experts from 32 countries. During this week’s tour, Harrington and Holgate announced that NNSA was offering to host additional training for surrogate inspector trainees at NNSS in October 2017. This effort will help trainees to identify anomalies or artifacts associated with locations where nuclear explosive testing has occurred. Based on evaluations by the Nevada Familiarization Activity participants, CTBT OSI training is most effectively conducted at an actual former nuclear explosive test site such as NNSS.

“NNSS is an unmatched resource for the CTBT on-site inspection trainees, and we are pleased to again allow access to one of the few places in the world where trainees can see firsthand the effects of past nuclear explosions,” said Harrington.

“The former test site is an excellent fit to develop our On-Site Inspection capabilities. The experience our future On-Site Inspectors can gain here is second to none,” Dr. Zerbo said.