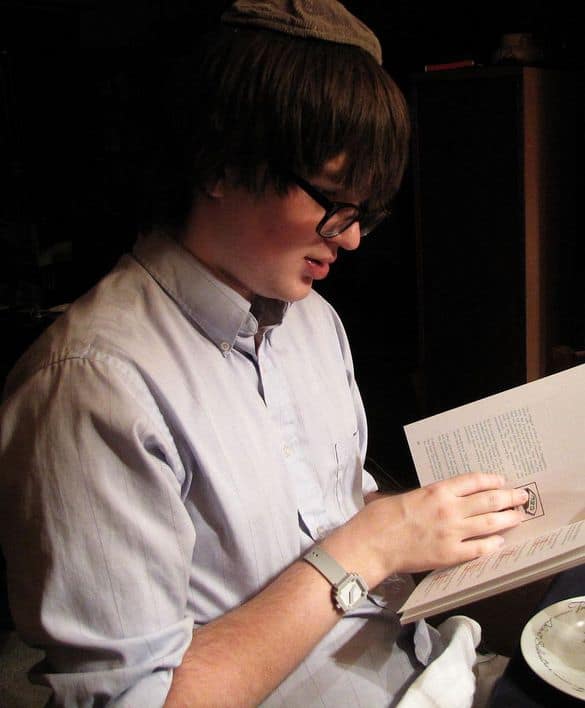 White Rock resident Jacob Sigeti reads from the Haggadah, containing the story of the Exodus from Egypt during a Seder meal at his home Friday evening. Photo by Carol A. Clark/ladailypost.com

Friday marked the beginning of one of the Jewish religion’s most sacred and widely observed holidays, Passover, which commemorates the story of the Israelites’ departure from ancient Egypt. Jews observe this weeklong event with a number of important rituals, including traditional Passover meals known as Seders, the removal of leavened products from their home, the substitution of matzo for bread and the retelling of the exodus tale.

A local family invited the Los Alamos Daily Post to observe their Seder and to share that experience with its readers.

Each person received a copy of the Haggadah, containing the story of the exodus from Egypt in Hebrew and English. Everyone at the table participated in reading passages from the text. 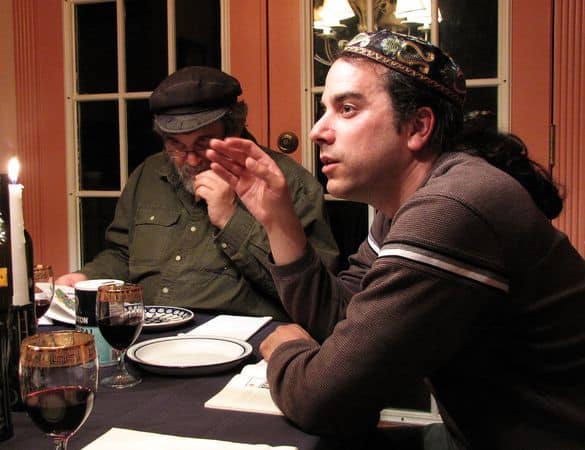 Stein, who is the manager of the wellness department at the Los Alamos Cooperative Market sang passages in Hebrew and joined the family is singing traditional songs.

Gordon placed a Seder plate at the center of the table.

‘This contains traditional Passover foods with particular significance to the Exodus story, including matza, bitter herbs of horseradish and radishes, a lamb shank bone and a mixture of fruit, nuts and wine known as charoset, which represents the mortar Jews used while bonding bricks as slaves in Egypt,” said Gordon, public affairs director at UNM-Los Alamos. 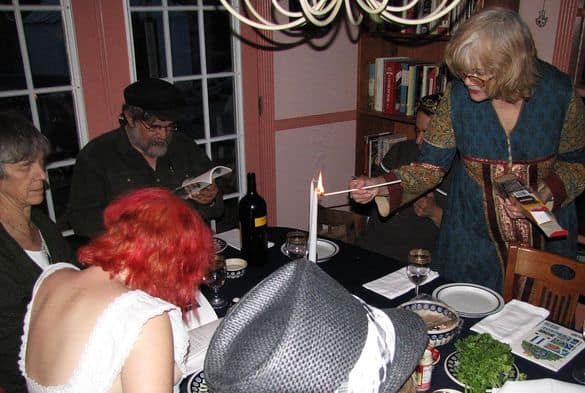 Bonnie Gordon lights candles for the Seder meal in her home Friday evening. Photo by Carol A Clark/ladailypost.com

Those gathered at the table shared in a hand washing purification ritual and ate parsley dipped in small bowls filled with salt water. Horseradish stands for the bitterness of our ancestors lives as slaves and the charosit stands for the mortar used to build the pyramids.

“This signifies the tears of our ancestors under the cruelty of the Pharoah, the king of ancient Egypt,” said Sigeti, a physicist at Los Alamos National Laboratory.

As part of the Passover tradition, the family removed all leavened food products, chametz, from their home and will abstain from them throughout the week. Instead of bread, the family will eat matza, a type of flatbread, which signifies Hebrews fleeing Egypt in such haste that there was no time for their bread to rise, Sigeti said.

Earlier in the Seder, Sigeti as master of the Seder hid a piece of matza called the afikoman and after the meal, the young people at the Seder searched for it and ransomed it back because the Seder cannot be finished until the afikoman is consumed. Mortenson found the afikoman.

The family poured a cup of wine for “Elijah the Prophet” when the fourth cup of wine was poured and they opened the door for him and invited him to join the Seder.

“We pray he will return and bring a time of peace and freedom,” Sigeti said.

As is tradition, the Seder ends with the words “Next year in Jerusalem,” signifying the end of the Jewish exile and the return to Israel, he said. 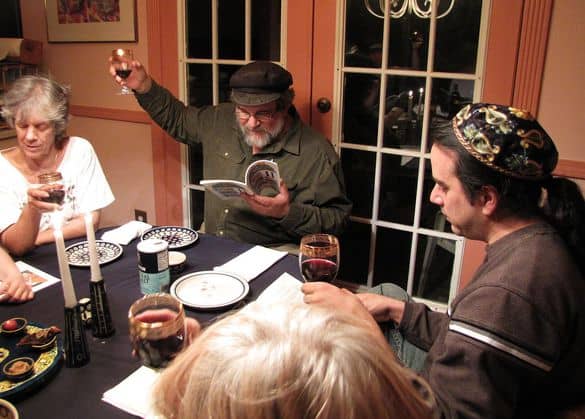 According to the Bible, Jewish settlement in ancient Egypt first occurs when Joseph, a son of the patriarch Jacob, moves his family there during a severe famine in their homeland of Canaan. For many years the Israelites live in harmony in the province of Goshen, but as their population grows the Egyptians begin to see them as a threat. After the death of Joseph and his brothers, the story goes, a particularly hostile pharaoh orders their enslavement and the systematic drowning of their firstborn sons in the Nile.

One of these doomed infants is rescued by the pharaoh’s daughter, given the name Moses (meaning “one who is pulled out”) and adopted into the Egyptian royal family.

When he reaches adulthood, Moses becomes aware of his true identity and the Egyptians’ brutal treatment of his fellow Hebrews. He kills an Egyptian slave master and escapes to the Sinai Peninsula, where he lives as a humble shepherd for 40 years. One day, however, Moses receives a command from God to return to Egypt and free his kin from bondage. Along with his brother Aaron, Moses approaches the reigning Pharaoh (who is unnamed in the biblical version of the story) several times, explaining that the Hebrew God has requested a three-day leave for his people so that they may celebrate a feast in the wilderness.

When the Pharaoh refuses, God unleashes 10 devastating plagues on the Egyptians, culminating in the slaying of every firstborn son by an avenging angel. The Israelites mark the doorframes of their homes with lamb’s blood so that the angel will recognize and “pass over” each Jewish household.

Terrified of further punishment, the Egyptians convince their ruler to release the Israelites, and Moses quickly leads them out of Egypt. The Pharaoh changes his mind, however, and sends his soldiers to retrieve the former slaves. As the Egyptian army approaches the fleeing Jews at the edge of the Red Sea, a miracle occurs: God causes the sea to part, allowing Moses and his followers to cross safely, then closes the passage and drowns the Egyptians.

According to the Jews — now numbering in the hundreds of thousands — then trek through the Sinai desert for 40 tumultuous years before finally reaching their ancestral home in Canaan, later known as the Land of Israel.

Click on the link below for a gallery of Passover photos.