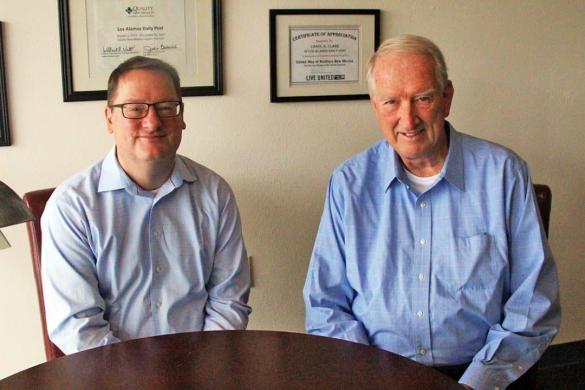 The developer is Site A-19-A-1 Acquisition Group LLC with Principal Adam Thornton, a Los Alamos native, his RayLee Homes partners and their representatives.

The Group is requesting the Los Alamos County Council authorize a Public Infrastructure District (PID) for the Mirador Subdivision. This will allow them to recoup a portion of the expensive site preparation complicated by basalt deposits.

During his meeting with the Post Monday, Erickson provided context on the Subdivision because of his years on the White Rock Master Plan Implementation Committee, which was retired by the County Council in June 2016 following eight years of community service and leadership.

This committee was active during five County Councils and multiple County managers and became the corporate memory for the White Rock Master Plan, he said. In addition to the development of A-19-A, the plan called for improvements to NM4 and construction of a Visitor Center and a Civic Center to house the Branch Library, the Senior Center and the Youth Activity Center.

“The first projects were the Visitor Center and the Rover Boulevard to Sherwood NM 4 beautification. The Canada Del Buoy Pathway was next and provided a pedestrian flow into the Rover Boulevard to Sherwood area. What followed was construction of a separate Library/Youth Activity Center and remodeling of the existing White Rock Municipal Complex with a signicantly expanded Senior Center. The     missing piece is the Subdivision,” Erickson said.

The first developer dropped out of the project followed by a second. Former County Manager Tony Mortillaro then asked the committee to recommend a masterplan for A-19-A, which opened the imagination of some people to bid creatively, he said. Thornton and his RayLee Homes partners got involved.

“In June of this year Adam and his team began site preparation. The team had two options to deal with the basalt. The first was to bring in significant and expensive fill to raise the level of the site sufficient to accommodate utility trenching. This method was used in construction of the Visitor Center with a much smaller footprint. The second option was to use contemporary blasting techniques. The team chose the latter method,” Erickson said. Continuing, he said “Adam and his team have done something really significant with this property that many others said was undevelopable.”

Mirador will have 161 single family homes and Erickson explained that the issue now is Thornton needs  proceeds from a bond to recoup site preparation costs, which will be used to expedite construction including addition of a commercial complex with 60 loft apartments as well as retail space for perhaps a coffee shop, a tap room and other essential services.

“The PID is a tool offered by the State of New Mexico to leverage economic development across the state,” Erickson said. “The levy is on the future homeowner and not a county-wide tax initiative, but the County, as required under the state statue, would collect the levy.”

Andrus explained that the developer has the option of raising the initial price point of the home at the outset. However, their position is that doing so would delay their ability to reduce their carrying costs and complete the project in four years rather than seven, which was the original timeframe outlined in the existing development agreement.

“With the PID the developer is stating that he can recoup a portion of the single family portion of the development infrastructure costs and use that capital to move forward on the commercial complex and lofts,” he said. “Because the land development costs were so high, they are making the case for the PID, as they know that White Rock and the county as a whole are greatly in need of not only new housing units, but new neighborhood-serving commercial space as well.

The cost to the homeowner will average about $200/month under the PID but without it could run as high as an additional $50,000 per home, he said.