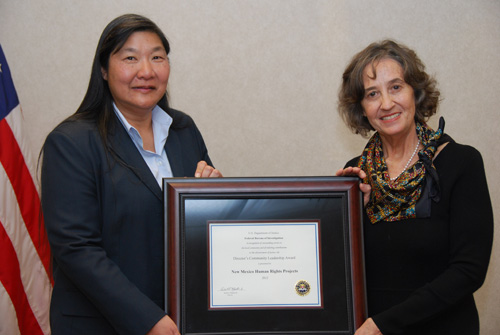 Each of the FBI’s 56 field offices annually selects an individual or organization to receive this award, which honors efforts in combating crime, terrorism, drugs and violence in America.

“I am proud and humbled to accept the FBI Director’s Community Leadership Award for the work New Mexico Human Rights Projects has done within our community,” said Regina Turner, NMHRP executive director. “I am grateful to the FBI for recognizing those of us who strive to make the world a better place.”

SAC Lee presented a certificate to Turner at the Albuquerque FBI Field Office. Turner has been invited to an April 5, 2013 ceremony in Washington, D.C., where FBI Director Robert S. Mueller, III will present her and other recipients with crystal awards.

NMHRP is an Albuquerque-based, non-profit organization that provides unique, hands-on programs that engage people to think about the choices they make when confronted with prejudice, racism, violence, and discrimination.

Since 1995, NMHRP has impacted more than 250,000 New Mexico residents, primarily students and teachers from 370 public and tribal schools throughout the state.

SAC Lee said, “This organization’s commitment to human rights is truly inspiring and has helped a countless number of people learn more about this important subject. NMHRP certainly is a worthy recipient of this year’s award.”