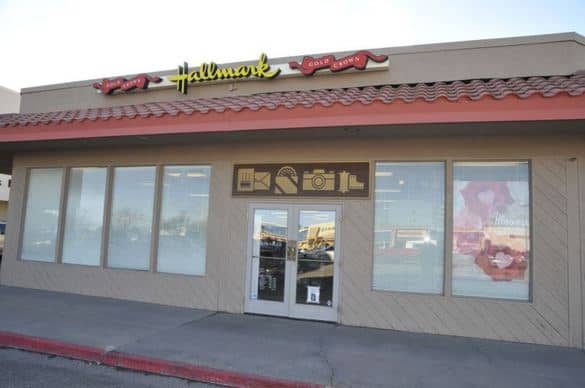 In its final weeks of operation, Brownell’s Hallmark in the Mari Mac Shopping Center is closing its doors after 20 years serving the communty. Photo by Greg Kendall/ladailypost.com

Twenty two years ago this month, Steve and Judy Brownell moved to Los Alamos and opened the doors of Brownell’s Hallmark at 609 Central Park Square.

On Monday, everything in the store goes on sale at a minimum of 20 percent off and as high as 75 percent.

“As time goes by we’ll increase the minimum percentage and depending on how successful we are at selling things off, we’ll close the store for good in late March or early April,” said Steve Brownell during an interview from the store Wednesday.

The Brownell’s made every effort to sell the store before their planned retirement but found no buyers.

Katy Korkos of the Los Alamos Chamber of Commerce commended the Brownell’s for their contributions to the community. 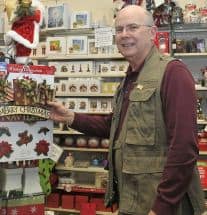 Owner Steve Brownell is retiring after 22 years and everything in his Hallmark store is going on sale Monday. Photo by Greg Kendall/ladailypost.com

“Steve is an excellent business man and we are sorry to see him retire,” Korkos said. “He and Judy have been great assets to the community all of these years and they will really be missed.”

The Brownell’s Los Alamos home is on the market and as soon as it sells, the couple, married 48 years, intend to move to a retirement community within six blocks of their Hutchinson, Kan., home in which they lived for two decades before moving to Los Alamos in 1990.

Brownell admitted that he secretly hopes their Los Alamos  home might not sell for a few months so that he has time to relax before moving to Kansas.

“I can pretend I’m on vacation,” he joked.

Brownell, 70, explained that the gift he and his wife are giving their children is that they are moving into Wesley Towers, a continuing care retirement community. The community offers everything from duplex homes for independent living, which is where the Brownell’s will live, to skilled nursing and Alzheimer’s care.

Brownell served on the board of directors of this Methodist sponsored retirement community more than two decades ago, he said.

“It’s a beautiful campus and right next to the neighborhood where Judy and I lived for 20 years so we know everyone living there now,” Brownell said laughing. “The company that operates the retirement community takes care of all maintainance for the residents including yard work, which is great – I can just go fishing.”