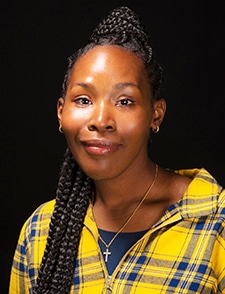 The British High Commission Nassau awarded Strachan, a Freeport, Grand Bahama native, the scholarship. She is the only Bahamian to receive the honor this year.

“My passion is to focus on original content creation of television shows and movies,” Strachan said. “The stories that are most important to me are true stories. The stories of those who have been silenced by fear or silenced by shame. I want my films and television shows to be the platforms that give them a voice, breaking the silence and bringing hope to others.”

Strachan, age 28, earned her Bachelor of Fine Arts degree from Highlands in 2014 with an emphasis in film. She worked in film production for several years in the film industries in New Mexico and Georgia. In 2018, Strachan returned home to the Bahamas and began working for the Broadcasting Corporation of the Bahamas at the ZNS Northern Service.

Strachan has won several global awards for her film and photography work. Most recently in June 2020, her film, “Dear Tyler Perry,” about Hurricane Dorian in 2019, was selected for the 10th Annual Emerging Lens Cultural Film Festival in Halifax, Canada. The film also won an Audience Choice Award at the festival.

Strachan screened “Dear Tyler Perry” for the first time at Highlands in October 2019 at a benefit for Bahamian survivors of Hurricane Dorian.

In March 2020, Strachan produced a scripted-drama series titled “So Let’s Talk” that focused on breaking the stigmas surrounding mental health. After the four-part series ended, Strachan hosted a talk show that continued the conversation during Mental Health Awareness Month in April.

“Today I’m working on writing scripts to add to the slate of films I plan to produce over the next several years. Some of the topics include a film of the “So Let’s Talk” series, a college drama series focusing on the life of international students, and “Sharing Dad,” a fictional family comedy drama about blending families through marriage,” Strachan said.

Strachan said she chose Bournemouth University for her master’s degree because she was in search of a program that would equip her to help further develop the Grand Bahama film and television industry.

“Bournemouth University has one of the best media production programs in the United Kingdom. I love that the program is only a year and that it will teach me what I need to know about producing. The program is also accredited with the International Moving Image Society and partners with the Royal Television Society,” Strachan said.

Strachan said her BFA in media arts and technology from Highlands gave her “tremendous” preparation for a career in film production.

“Highlands media arts is an excellent program that made me very well versed in media. My emphasis in film equipped me with advanced skills in production,” Strachan said.

Strachan said that in addition, she uses her knowledge from Highlands’ photography and graphic design courses daily in her work at the Broadcasting Corporation of the Bahamas.

“I am assigned to the social media unit and create graphics and videos for social media,” Strachan said.

The Chevening Scholarship is the United Kingdom government’s global scholarship that offers future leaders the opportunity to study in the UK.