How The Hen House Turns: No Horses In The Backyard 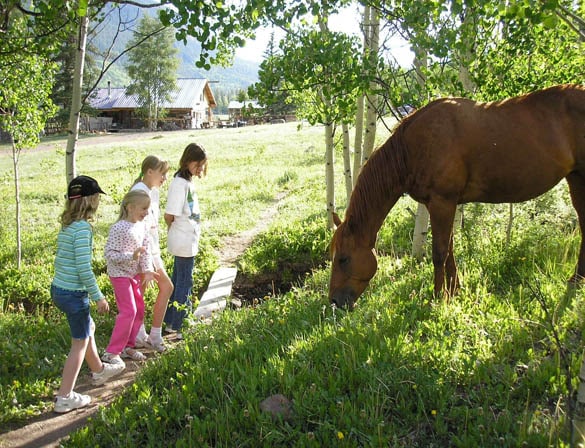 By CARY NEEPER
The residents of the Hen House during our forty years in Los Alamos taught us tovrespect their personhood. And now, in the last decade or two, academic studies confirm the notion that animals do have emotions and cognizance.
Sadly, we were stuck too long in Rene Descartes’ 17th century idea that “nonhuman animals cannot reason or feel but are…machines made out of meat.”
Charles Darwin disagreed, and now we have lots of evidence, not only from personal anecdotes, but from careful studies of animals in their natural environments, as well as in the laboratory.
I have enjoyed several recent books that summarize these studies. The latest is called The Horse: The Epic History of Our Noble Companion by Wendy Williams, Toronto, Harper Collins, 2015.
Williams begins her book by listing several studies of various animals—Goodall’s observation of tool use by chimpanzees, communication of humpback whales with “rivers” of sound, the puzzle solving of crows, the agility and anger of octopuses, the protective teamwork of elephants and their mourning.
Our neighbor here in California, Koko the gorilla, uses “…1300 gestural words to communicate her thoughts, feelings, needs and desires. She understands “…more than 2000 words of spoken English.” Oddly, though we humans have had a long-term relationship with horses, it’s been only recently that the natural history of horses has been studied.
Most ungulates (sheep, cows, sheep, and bison) form large herds, but horses live in small bands—small bonded groups that “are quite fluid.” Three to ten horses interact as a group that is often based on several mares and their young. They often “squabble” and even switch allegiance in mating with those in other bands.
They battle over position and personal space. They argue, make alliances, posing and threatening with head raised and hindquarters “coiled” and pounding the ground with straight legs. They snort and bare their teeth and arch their necks. All this goes on so the stallions can establish position in the band or mating privilege, while the mares pay little attention.
Lead stallions can be turned down by stubborn mares. Two bonded mares were observed to leave their band, rejecting the main stallion. They mated with the stallion of another band. Also, not all fouls were fathered by the lead stallion of their band. Some horses are free-roaming, waiting patiently for a chance to mate. Sometimes the mares or the subordinate stallions will “initiate” a band’s movement.
I worry when I see a horse in a large enclosure, alone. “Alliances are made and broken,” the author tells us, but the “…one given is that no wild horse will never choose to be alone.” Perhaps that is the most important thing to remember when we design the care of these quiet, persistent and socially creative beings.
The puzzle remains: Why have horses been so accommodating to our needs, even to our demands for hard work, even portage in ancient battles? Perhaps a clue lies in their ability (or need?) to accept human leadership. And perhaps a clue lies in the author’s comment that “…some horses act one way in public and then behave quite differently when no one is looking.”
Sounds familiar.
Menu
LOS ALAMOS