How The Hen House Turns
By Carolyn A. (Cary) Neeper, Ph. D.

How The Hen House Came To Be … And Other Things, Like Goats

It must have been the summer of 1973 when Don built the Hen House. Our youngest daughter was about to have her sixth birthday.

She wanted a pet of her own, because, the year before, someone’s white rabbit had wandered into the yard. As a result, Santa Claus brought middle daughter item number one on her Christmas wishlist–two white rabbits, Sniffy and Pinkears.

Youngest daughter (YD) lucked out that next summer. The timing was right. Don had raised chickens as a boy and was thinking about doing that again. Our new dog Poncho, a six-month-old “Santa Fe shepherd,” had accepted the rabbits as his responsibility. 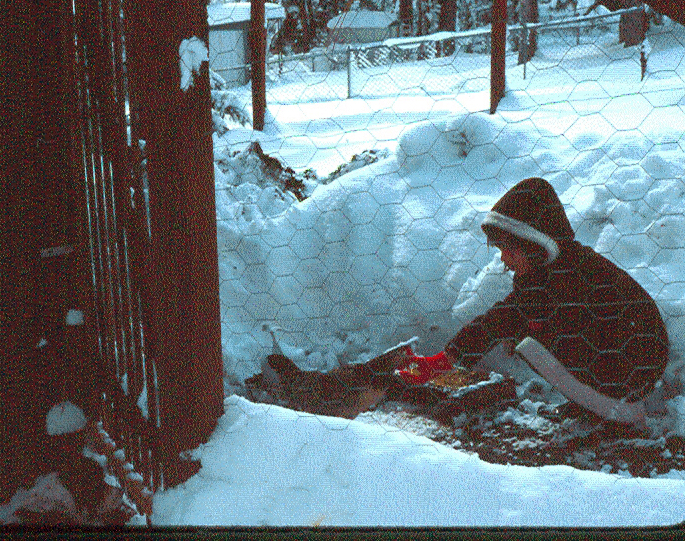 Poncho wasn’t a female and he wasn’t a strawberry blond, but he was the only dog in the Santa Fe shelter who wasn’t barking his head off. He was old enough to be easy to train and young enough to adopt and herd smaller animals.

Working feverishly, Don rushed to build the disaster-proof, leak-proof, insulated Hen House before July (more about hen houses built by physicists in a later article), and on YD’s birthday we traveled down to Nambé.

There we plucked out three hens from Ron London’s trees, where they were roosting.

Oldest daughter (OD) was not a happy camper, but, in the excitement of adopting the gorgeous chickens, we didn’t notice.

OD suggested some wonderful names–appropriate for an eleven-year-old romantic – but YD wouldn’t hear of names like Veronique. She named the chickens Peeky, Cocky and Bawky, and we had to live with it.

We woke up a bit to the needs of OD then, and promised that on her twelfth birthday, she could choose a pet. To celebrate the birthday, we drove to ABQ to visit the State Fair livestock barns. Sure enough, Murphy’s Law kicked in. While visiting the second barn, OD fell in love with a miniature goat.

We tried. We really tried. We even checked out the current animal rules at the county clerk’s office. Rumor had it that Alice Westervelt had had a well-behaved house goat here, in the early days.

Sure, it would eat everything in the garden, but we could fence off the vegetable terraces. We even checked with the neighbors. They didn’t care.

But rules are laws, and we wanted our children to respect the rules. No goat.

OD was devastated–again, we learned. “Everyone got a pet when they were six except me, and now I can’t ever have one.”

We still remember her pain. What kind of parents were we? Actually, we were moving all over the country at that time having babies and dogs. We landed in Los Alamos and settled down for good in 1969, when OD was seven.

“But you had Skates then,” I said weakly. (Skates was a female strawberry blond shepherd that we inherited before OD was born. We had adopted Poncho after Skates died in 1972.)

Of course she was right. Skates was like a third parent, not a pet, not all her own. We had to do something.

We got OD a skunk.

Tune in next Friday.

Editor’s note: Dr. Neeper is an avid student of sustainability, steady‐state economics and the impact of cosmology on issues of science and religion. She and her husband Don Neeper live in Los Alamos with a friendly menagerie of dogs, fish and fowl. CaryNeeper.com/blog.htm