How The Hen House Turns: Dogs, Cats and Wildness 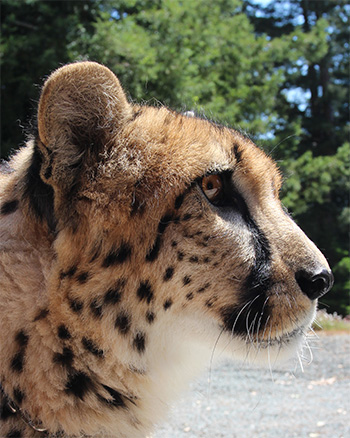 Themba (Hope in Zulu) the Cheetah is one of the educational animals used by Wildcat Education and Conservation Fund to promote conservation of wild cats. The fastest of all land animals, cheetahs can run up to 70 miles per hour in pursuit of their prey. A cheetah’s maximum stride length is around 22 feet, with almost half of that distance traveled fully airborne. Once found throughout Africa and Asia, the cheetah has been sharply reduced through hunting and habitat destruction to sub-Saharan Africa with a small population in Iran. Only around 12,000 cheetahs are left in all of Africa, and another 200 left in Iran. Cheetahs have been around for at least 3 million years, before any other cats. Courtesy/www.wildcatfund.org

Earlier in this column I have mentioned Oscar, the kitten my brother found under the Fairview School House in Hayward, CA. Oscar grew up to hunt gophers with our dog Boots. He rubbed against our legs and kept us company when we roamed about our 40 acres. Though he was affectionate and responsive, he refused to come into the house. We couldn’t make him come in. That was our territory. The forty acres was his.

Now, after seeing the Wild Cat Adventure show last night, I understand Oscar’s wild inclination to respect territories. Since 1993 wildcatfun.org has bought, for educational purposes, endangered wild kittens born in captivity from zoos and other endangered cats from licensed breeders.

The trainers accustom the cats to appear in educational venues before audiences, all the while respecting their wildness. To put it simply, they don’t intrude on the cats’ spaces– the territory that they are careful to spray–their small carriers or substantial dog crates and large outside enclosures. If the trainers must enter the cats’ enclosures, they go prepared to be bitten or scratched.

During demo lectures in front and a safe distance from an audience, the cats are put on strong leashes, set on a long set of tables, and invited to pounce on treats when the trainer  thumps the table with bits of meat. The cats glance at the audience, which is told to sit still, but they are easily distracted (trained) with the treats. Their fear of the audience is calmed by the trainer’s familiar presence and his willingness to accept their rubbing cheek to cheek for assurance. Without their territory, they look to him for security. In their own territory, they don’t tolerate visitors.

Last night at our demonstration, the trainers’ first cat looked like anyone’s house cat, but it needed lots of cheek rubbing to come out if its crate. It’s rare species may soon go extinct as Earth’s wetlands disappear. The black leopard (“panther”) was gorgeous. The spotted Mt. Lion cub was young enough to be carried around the audience. He will get very fearful of strange humans in a few months. The middle-sized Fishing Cat, who can close his ears underwater, was interesting, and also endangered.

But the full-sized cheetah, snatching at tossed treats on the tables, gave me the shivers. He was huge, long and lithe. I hoped he was eager for the treats. There are only 12,000 left in Africa, 200 in Iran, a species three million years old.

How does the trainer exercise the cheetah, who can accelerate rapidly, leap 22 feet, and run up to 70 mph? Twice each week the trainers drag a red ball on a long string behind a car racing across a 200 yard field. The cheetah goes after the ball. When the ball disappears from sight, the cheetah braces to a quick stop. The trainer must very quickly toss him a dead rabbit and snap on his leash while the cheetah gorges on his “kill.”

Don’t try this at home. You can watch all this during a $95 tour somewhere near Occidental, Calif. Better yet, visit http://www.wildcatfund.org and enjoy the magnificent photos and stories of these endangered cats.