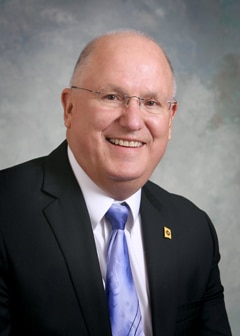 Passed and signed into law following the 2021 Legislative Session, the newly established Citizen Redistricting Committee is composed of seven members, with one member each appointed by the Speaker of the House, Senate President Pro Tem, and Minority Leaders in both chambers.

The State Ethics Commission appoints 3 members, including a retired judge, either from the State Supreme Court or the New Mexico Court of Appeals, who will also chair the committee.

A lifelong resident of Belen, Sanchez earned his Juris Doctor degree from the University of New Mexico School of Law and currently practices at his law firm in Los Lunas. Sanchez served in the State Senate for 24 years until 2016. He represented Senate District 29, which encompasses portions of Valencia and Bernalillo Counties, and was elected Senate Majority Leader for three terms after chairing the Senate Judiciary Committee.

Sanchez was also elected Vice President of the National Conference of State Legislators, a national bipartisan organization dedicated to advancing effectiveness, independence, and ethics in the legislative branch across the nation. Through his time in public service, Sanchez gained a deep knowledge of our state’s culturally and geographically diverse communities, expertise in the redistricting process, and a passion for protecting the constitutional right of all New Mexicans to be fairly represented.

“I am honored and grateful that the Speaker has placed his confidence in me to assist the state of New Mexico on this redistricting committee,” Sen. Sanchez said. “The process of redistricting is critical to instilling the trust citizens need in their representative democracy. I am committed to protecting their right to fair and equal representation, and I look forward to working with fellow members of the committee to create new district maps that preserve communities of interest and reflect the geographic and cultural diversity of our state.”

“The people of New Mexico deserve a fair, open, and constitutionally sound redistricting process that takes into account the diversity of our great state,” Speaker Egolf said. “I appointed Sen. Sanchez because he has long demonstrated a staunch commitment to ensuring the rights of all New Mexicans to be equally heard in state government, and his depth of knowledge about this state and its communities is unparalleled. With his input, I am confident the maps created by this committee will accurately reflect the demographic changes our state has undergone over the past decade, and will serve New Mexicans fairly for the next decade.”

Sen. Sanchez is a registered Democrat. By law, the Citizen Redistricting Committee can have no more than three members affiliated with the same political party and all members must be announced no later than July 1, 2021. To qualify for appointment, members must meet certain criteria, including: currently being a qualified New Mexico voter, not having been a public official, candidate for public office, or lobbyist over the previous two years, and not currently an employee of the executive or legislative branch of government.

After appointing all members, the Citizen Redistricting Committee will hold at least six hearings throughout the state before drafting new sets of district maps, and six hearings to discuss the proposed maps. Then, the Committee will adopt at least three proposals each for Congress, the state Senate, the state House, and the state Public Education Commission to submit to the Legislature before a special session on redistricting. All hearings will be open to the public, and active public participation is encouraged.