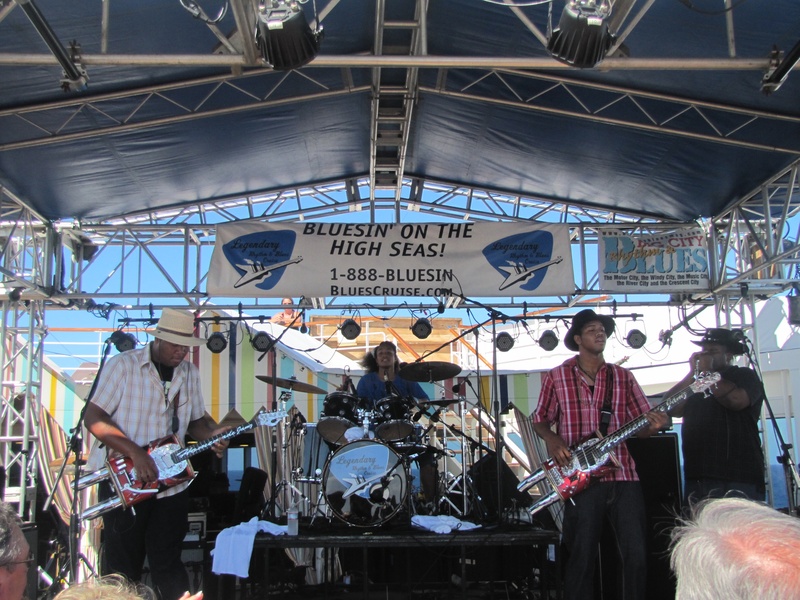 The 2013 Los Alamos County Summer Concert Series continues at 7 p.m. Friday, June 21 with what will be a fantastic concert up at the Ski Hill staring the Tupelo, Miss., group, the Homemade Jamz’ Blues Band.

This family band grew up a couple of blocks from the home of Elvis Presley. They’re the most successful young blues band in the world.

According to BB King, “In my 87 years, I’ve never seen something musically … so remarkable. These young kids have got energy, talent and do the blues proud with their own flavor. I believe they’ve got a great future ahead.”

The lead singer and guitarist, Ryan Perry started playing guitar when he was nine and discovered he had amazingly fast and agile fingers. That was 10 years ago. The bassist is talented brother Kyle, 17 and their sister, Taya, 14 is becoming a tremendous drummer.

HJBB has been featured on NPR’s “All Things Considered, PBS”, “The Tavis Smiley Show”, “CBS Sunday Morning” and “The Today Show.”

They are the youngest band ever nominated for the International Blues Challenge Awards. They were nominated for Best New Band at the Blues Music Association’s 2009 Awards and the BMA’s Band of the Year award in 2010. They are a contemporary, rousing, good natured, top-tiered, modern electric blues and blues-rock band.

Ryan, Kyle and Taya’s father, Renaud is the band’s harmonica player and wrote most of their earlier songs because the kids have never been to jail, had a broken heart or have children at home who they can’t afford to feed.

“If you love the blues, you play the blues with a feeling, as if you lived the blues,” Ryan said.

These young people are not in a gimmicky pop band. They can play the blues and Ryan can really growl. They’re one of the hottest bands on the today’s blues circuit. They are not just a blues band. Their early influences were blues rockers like Cream, Hendrix, the Animals and the Stones and that is most evident in their playing. They grew up listening and emulating BB King, Albert King and Stevie Ray Vaughan. They remind me of one of my all-time favorites, the late, fantastic singer, and guitar virtuoso, Freddie King.

The guitar that Ryan plays was made by Reynaud and Ryan from a Ford muffler that the son bought for a car that they were refurbishing. Ryan complained, but gave in to his dad. Today, he plays a double necked guitar that also uses a Ford muffler.

Brother Kyle’s six string bass also is made with a muffler. These homemade guitars are the hottest and smokingest, I’ve ever seen. They are cool. That first guitar they made is now in the BB King Museum! You can read more, see videos and listen to the band at http://www.facebook.com/l/NAQHSB8zy/www.hmjamzbluesband.com. Also check them out on Facebook and YouTube.

This show is Pajarito Ski Area Night. Early, reduced in price ski passes will be sold.

Next week, Friday June 28, we’ll be back at Ashley Pond with the Nashville rock band, SIMO. This great band plays a classic rock sound reminiscent of Blind Faith, The Stones and Hendrix fusing with bands like the Black Keys, the White Stripes and maybe Pearl Jam. It’s kind of a psychedelic rock.

Great concerts are coming and we hope to see you there, Russ Gordon russ@gordonssummerconcerts.com.