History Of The Crucifix At IHM 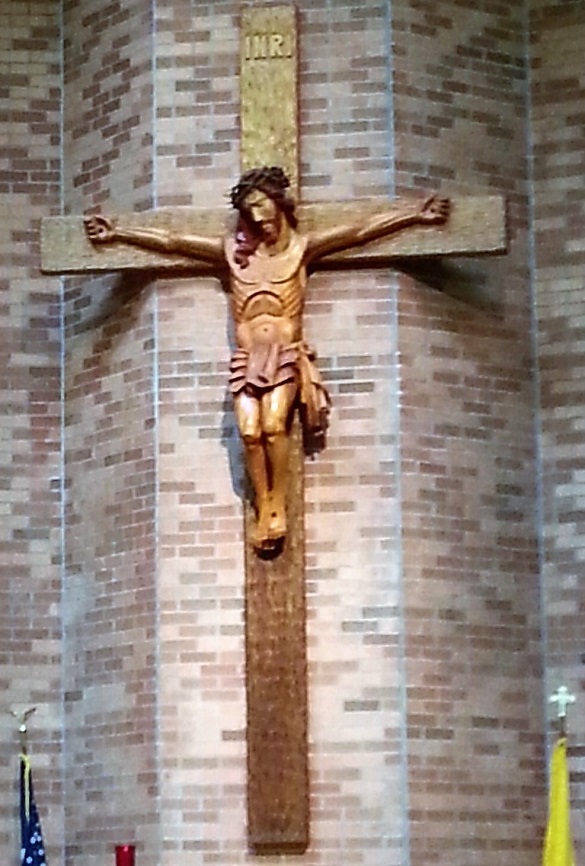 The crucifix on the alter at Immaculate Heart of Mary Catholic Church in Los Alamos. Photo by Elise Lee
By RAMON GARCIA
Los Alamos

For more than 2000 years the Roman Catholic Church has had the crucifix—a figure of Jesus crucified on a cross—as the focal point on the altar for believers as we enter our basilicas, cathedrals, shrines, churches, or chapels.

The crucifix is situated near or on the altar, and Catholics “bless themselves” by making a sign of the cross with holy water and bending the knee at the foot of the cross in reverence to Christ. The crucifix is a visible reminder of the Passion in which Jesus Christ suffered and was crucified in atonement for the sins of the whole world.

Catholics do not worship images as is sometimes mistakenly believed, but rather the reverence or adoration shown is veneration to the person depicted—whether it be adoration to Christ, or respectful reverence to the saints.

Pope Francis has said: “Jesus on the cross feels the whole weight of evil, and with the force of God’s love he conquers it. He defeats it with his resurrection.”

The construction of the new Immaculate Heart of Mary Catholic Church (IHM) began in 1967 in Los Alamos. Because of the Second Vatican Council (Vatican II”), the 1960s were a time of major restructuring of the Roman Catholic Church worldwide. Vatican II introduced significant modifications to, and updated some of the more traditional practices of the Church.

However, a mistaken interpretation of Vatican II often resulted in the belief that statues, and other aids to worship should not be used. Thus, when IHM was dedicated in October 1968, it did not have the traditional crucifix, kneelers or stations of the cross. The congregation would simply stand in prayer with eyes focused on the altar.

In late 1969, IHM commissioned artist Don W. Williams to hand-carve the large crucifix that is mounted near the altar today. He estimated the carving would take 12 months and completed it in only nine months. He did not accept payment for his work on the crucifix. His nephew Mark Williams posed during the carving of the crucifix. He was about 15 years old.

Williams died Oct. 20, 2010 at the age of 80. He was born in West Virginia to A. E. and Hazel Williams. He served in the U.S. Army during the Korean War, and was stationed in Japan. He had an artistic gift that was revealed in his sculptures and paintings, and was a world-renowned wood carver.

Williams was preceded in death by his wife Josephine, his daughter Debbie and his brother Ray. He was survived by his daughter Sandra from Georgia, nephew Mark and his family from Los Alamos, and many friends.