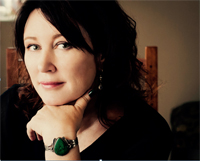 Wallace grew up in Los Alamos and is the award-winning author of three books of poetry. Wallace’s lecture includes readings from her latest book, Kingdom Come Radio Show (Barrow Street, 2016).  Los Alamos and the Manhattan Project compose the backdrop for Kingdom Come Radio Show, apoetic documentation of place (Los Alamos) and history (both personal, and that of the ManhattanProject).

“Oppenheimer, pacing at dawn, smoking, working the equation that says the atmosphere will/will not ignite when the gadget blows straight up into Kingdom Come. In the tilt shot, Kitty Puening Oppenheimer, drink in hand, clink, clink of ice against glass. … Cut to a longdrive along a stretch of road, almost-dark, the percussive hiss of cicadas, stereo. Hank singing on this road of sin you are sorrow bound.” –Kingdom Come Radio Show, Barrow Street Press, 2016.

Wallace says of the book: Kingdom Come Radio Show, inspired by the gorgeous pastoral of the Jemez mountains, particle physics, the lives of J. Robert and Kitty Oppenheimer, and my own experiences growing up in Los Alamos,aims to illuminate the complexities of the atomic age. In a poem, one can use sense of place as ananchor for larger concerns, a link between local details and global realities. Location – Los Alamos,lit city surrounded by the Jemez mountains, the place of my own childhood pastoral – is the starting point of Kingdom Come Radio Show. This includes the people living in Los Alamos now, and, as in allpoetry, the voice of the speaker of the poem and all those who came before her (the ghosts ofhistory). In the spirit of documentary film, Kingdom Come Radio Show shows the real Los Alamos; inanother sense, the book is intended as an exploration into what documentary filmmaker JohnGrierson calls “the really real:” something deeper than that. To quote Grierson, “In the end, theonly reality which counts is the interpretation, which is profound.”

An excerpt of praise for Kingdom Come Radio Showfrom James Bradbury, PhD: “Having grown upin Los Alamos (a generation earlier than the author), I passed through the ensuing decades as apracticing physicist harboring considerable angst about atomic age consequences and reverberations.Thus my resonance with this transcendent poetic documentary: beyond physics, beyond space-time,indeed, supra-noetic.”

Joni Wallace is the author of three books of poetry:  Kingdom Come Radio Show (forthcoming, Barrow Street, 2016), finalist for the Colorado Prize, the BesmilrBrigham Award, Word Works’ Washington Prize, and AROHO’s To the Lighthouse Award and the Colorado Prize; Blinking Ephemeral Valentine (Four Way Books, 2011), winner of the Levis Prize (selected by Mary Jo Bang); Red Shift (Kore Press, 2001), which garnered a fellowship from the Arizona Commission on the Arts.  She earned her MFA at the University Montana, and a BA and JD from the University of New Mexico.  Joni currently teaches at the University of Arizona Poetry Center and works as a freelance editor and writer.

Kudos to Joni Wallace for her revelatory assemblage of word and sound images that provide glimpses into the hopes and misgivings of Oppenheimer (architect of the Manhattan Project) andhis wife, as well as the southwest landscapes that surrounded the Project in 1945. Having grown upin Los Alamos (a generation earlier than the author), I passed through the ensuing decades as apracticing physicist harboring considerable angst about atomic age consequences and reverberations.Thus my resonance with this transcendent poetic documentary: beyond physics, beyond space-time,indeed, supra-noetic. Imagery constructed through allegory, sound piece, and metaphor transformsour mindset about super weapons, human exploitation of the planet, and the threats facing naturalsystems. Oppenheimer, appearing as “shadow puppeteer,” as tern, as aria inside the guts of a mouse,has “no direction home.” This portrayal of a crucial period is inspiring and emboldening but alsodisturbing in view of the atomic legacy and the present world condition.—James Bradbury, PhD

We know much of what happens when we break atoms apart. Yet how much of that human history can the human voice carry? Even the flesh is an agglomerate of unstable atoms, leaking secrets. Thisbook and its sound pieces show us how the poem, itself rattled by atomic shifts, can carry ourshadows. What’s left, our earthly remnants, is bathed in the light of song, like a deer leaping through

in its precise talent, bones made radiant. —EleniSikélianòs (author of The California Poem; The Book Of Jon; Body Clock).

If you wish to contact Joni Wallace for more information or for interviews, her email address isjoniwallace7@gmail.com. Her website is joniwallace.com.

The theme of Los Alamos Historical Society’s 2016-2017 lecture series is “Multiple Perspectives of the Atomic Bomb.” Visit http://losalamoshistory.org for a listing and schedule of lectures and events. The lectures are at Fuller Lodge on the second Tuesday of the month at 7 p.m., unless noted otherwise.