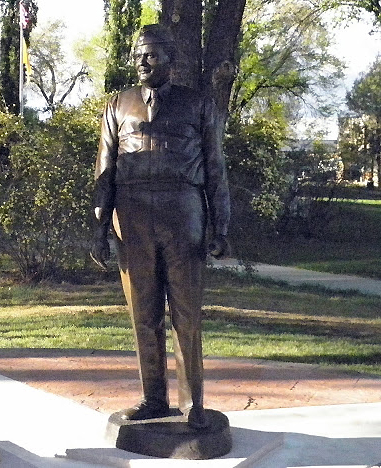 The community is invited to mark their calendars now because in celebration of Los Alamos National Laboratory’s 70th anniversary, April 5, 2013, the Los Alamos Historical Museum and LANL will hold a public celebration.

During this event, a magnificent portrait of Gen. Leslie Groves will be unveiled, which was recently donated to the Museum by the Groves family.

The community-wide celebration is set for 3 p.m. at the Betty Ehart Senior Center. More details to come.

The Manhattan Project extended far beyond the fences surrounding Los Alamos. By 1945, the massive Hanford plant in Washington State was beginning to produce plutonium. In Tennessee, the Oak Ridge facility had come on-line after months of struggle and was preparing uranium for shipment to Los Alamos. At the center of the entire operation stood a single man, General Leslie R. Groves.

Groves was born in 1896 in Albany, New York. His father, an Army chaplain, instilled many virtues in his son from early on, including a sense of duty to self, family, and country. He encouraged his children to compete with their peers and even each other in an effort to attain general excellence. His efforts paid off handsomely. Groves eventually won acceptance to West Point and graduated in 1918, fourth in his class. With his strong background in general science and engineering, Groves chose to pursue a career in the prestigious Corps of Engineers.

After graduating from West Point, Groves served with the engineers in Hawaii, Texas, Delaware, Vermont, and even Nicaragua. He attended the Command and General Staff School and later the War College. Groves accumulated an impeccable record during the 1930s, in the field as well as in the classroom. With only one exception, he received outstanding efficiency reports. This led to his appointment as Assistant Chief of the Quartermaster Corps’ Construction Division in 1941. At this post, Groves was charged to rebuild the country’s munitions industry. He forged alliances with major companies such as Du Pont and Monsanto Chemicals. Because of the success he achieved in this massive project, he was assigned to oversee the construction of the War Department’s new headquarters, the Pentagon.

The Pentagon was completed in less than a year and a half under Groves’ direction. His ability to accomplish large projects quickly and under enormous pressure led to his selection as chief of the super-secret Manhattan Engineering District. Groves’ new assignment would yield the world’s first nuclear weapon.

Groves, now a general, immediately began building a team of reliable subordinates. His most important appointment, as well as his most controversial, was .J Robert Oppenheimer. Oppenheimer, a brilliant theoretical physicist, had no experience as a manager and maintained close relationships with communists and communist sympathizers. Only Groves, a staunch conservative, saw in Oppenheimer the man who could build the nuclear bomb, and thus named him director the Los Alamos Laboratory.

Meanwhile, Groves enlisted Du Pont, Monsanto, and several other companies to construct industrial complexes at Hanford and Oak Ridge. His enormous capacity for work enabled him to closely monitor the construction efforts at all the major sites. Though Groves had developed many virtues during his upbringing, he could not count humility among them. His determination, often manifested in his arrogance and natural brusqueness, often rubbed people the wrong way – especially scientists and fellow military officers. But his persistence, ability to delegate responsibility, and the project’s enormous budget allowed Groves to accomplish his mission.

On July 16, 1945, Oppenheimer and his Los Alamos associates successfully detonated a plutonium bomb at the Alamogordo Bombing range. Groves’ team had produced the weapon that would end the war. The general had already selected several possible targets in Japan including Kyoto, Hiroshima, Yokohama, the Kokura Arsenal, and Niigata. In the end Hiroshima was selected because it remained largely untouched by bombing and presented a target of military value. Due to a variety of complicating factors Nagasaki, one of the alternate target sites, was also bombed. The shock of the bomb induced Emperor Hirohito to surrender, much to the chagrin of many of his powerful military leaders.

To his last breath, Groves remained proud of his great feat. In less than three years, the team he assembled unleashed the power of the atom and in doing so saved thousands of lives. In his headlong rush to complete the bomb in time for use in the war, Groves created many enemies. This helped lead to his premature retirement in early 1948. But he embraced his new life, accepting a lucrative position with the Remington-Rand Company, spending more time with his family, and playing lots of tennis.