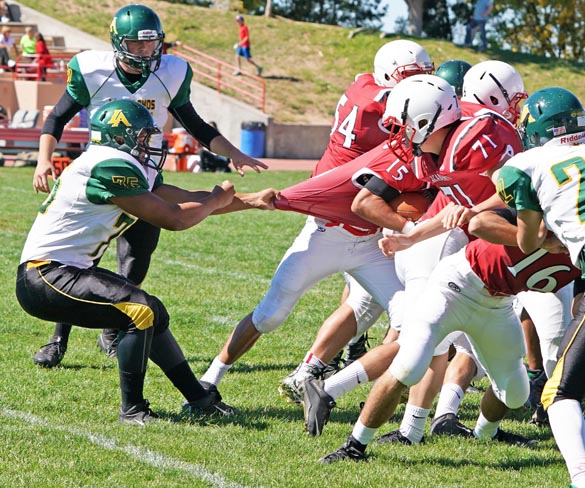 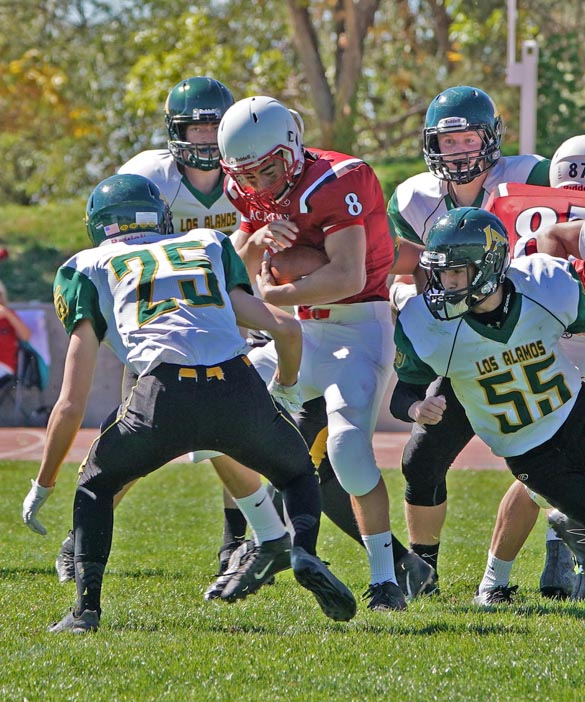 This Charger tackler finds himself surrounded by Hilltoppers early in the game. Photo by John McHale/ladailypost.com

ALBUQUERQUE – It only took three quarters of play for the Los Alamos Hilltoppers (5-3, 1-1 district 2-5A) football team to beat the Albuquerque Academy Chargers (2-6, 1-1 district 2-5A) 50-0 on a beautiful Saturday afternoon underneath the Sandia Mountain setting.

Academy set up the ‘Toppers first scoring play after the Chargers punted on third down giving Los Alamos possession at their own 20 yard line. Dylan Irish found a streaking Wyatt Seager for the 70-yard catch and the score to give Los Alamos an early 7-0 lead.

On the ensuing drive, Carson Schramm picked off Charger quarterback Tomas Lujan to give the ‘Toppers possession on the Academy side of midfield. With the very next play, Jack Stewart rushed the ball 48-yards for the second touchdown of the afternoon. Los Alamos would take the 14-0 lead into the second quarter.

Albuquerque Academy went three and out again, giving Los Alamos a great field position to start their third drive. Ryan McNeill would rush 49 yards before being caught at the 10 yard line. McNeill would cash in a one-yard touchdown to help the ‘Toppers go up 22-0 after a two-point conversion.

After another Charger third-down punt, Irish and Seager would go back to work scoring quickly off a 33-yard reception. The ‘Toppers would take a 28-0 halftime lead after missing the point-after attempt. Seager would finish the afternoon with three catches for 105 yards receiving and two scores.

The question coming out of the halftime break was “can the ‘Toppers keep the momentum?” Well … Yes.

Los Alamos put together a 10-play, 80-yard drive capped off with a McNeill three-yard score. Leander Murphy had a 20-yard rush getting caught at the three-yard line. Los Alamos would go up 35-0 to start the running clock.

Keeping with the theme, Los Alamos got the ball back with decent field position and scored quickly. This time Murphy wouldn’t be caught on his way to a 48-yard score. Murphy cut toward the middle of the field around the 20-yard line, causing two Charger players to run into each other, before Murphy jogged into the endzone. Los Alamos would go up 42-0 with three minutes left in the third quarter.

After stopping the Chargers on fourth down, Irish would hand the ball off to Stewart, who shoved three Charger players out of the way before getting to the endzone for the 62-yard score. The two-point conversion put the exclamation point on the game, instituting the 50-point mercy rule with just under a minute left in the third quarter. Stewart finished the game with 198 rushing yards and two scores.

Irish finished the day 3-4 for 119 yards passing, and 25 yards rushing for Los Alamos.

“When you come down to Academy, you’re going to play on Saturday afternoon and you play on a beautiful field and a beautiful stadium, it always has the opportunity to lull you to sleep, it’s like you’re playing in a park and you’re down here for a picnic. There’s a lot of times teams will come out here and start slow, we’ve done it in the past, so we harped on these guys all week, ‘We need to come out and hit these guys from the get go, and start fast and come play our game,’ and our guys did,” said Head Coach Garrett Williams.

Los Alamos will get a chance to rest and recover some personnel this week during a bye week, and prepare for a pair of games with the chance of winning a district title and capturing a playoff spot. 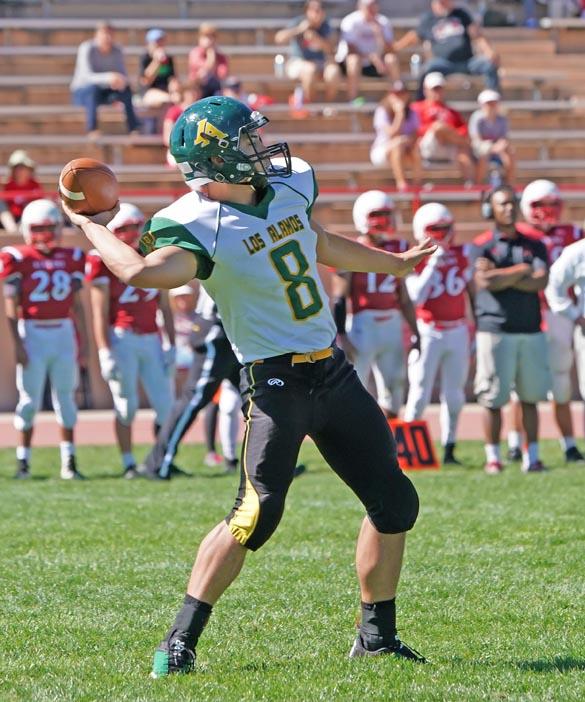 Dylan Irish is poised to throw a pass in the third quarter. Photo by John McHale/ladailypost.com 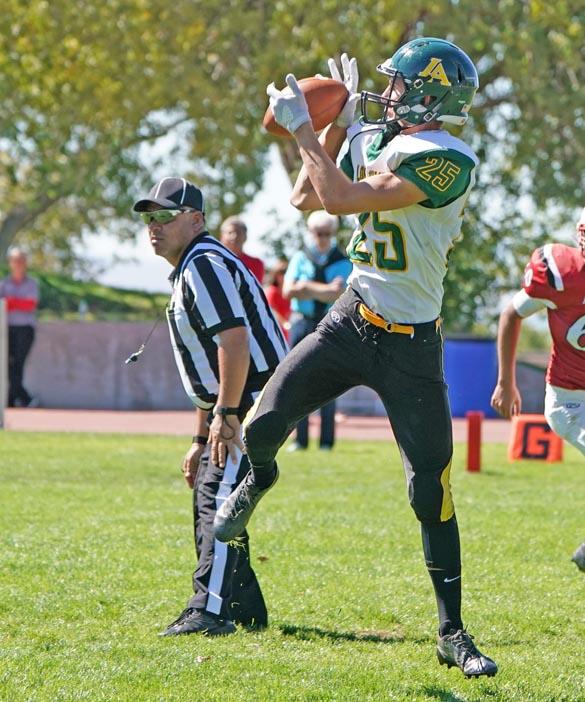 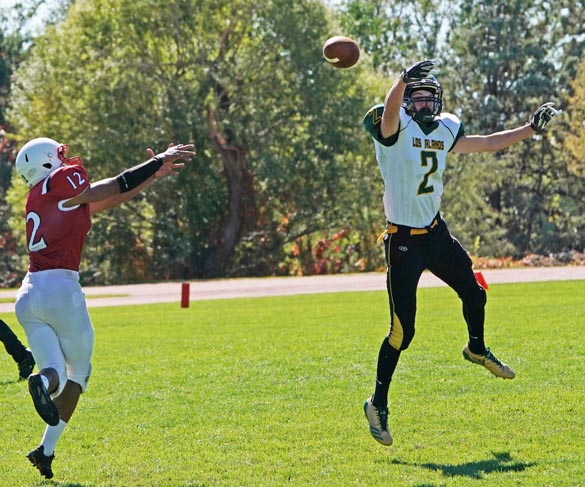 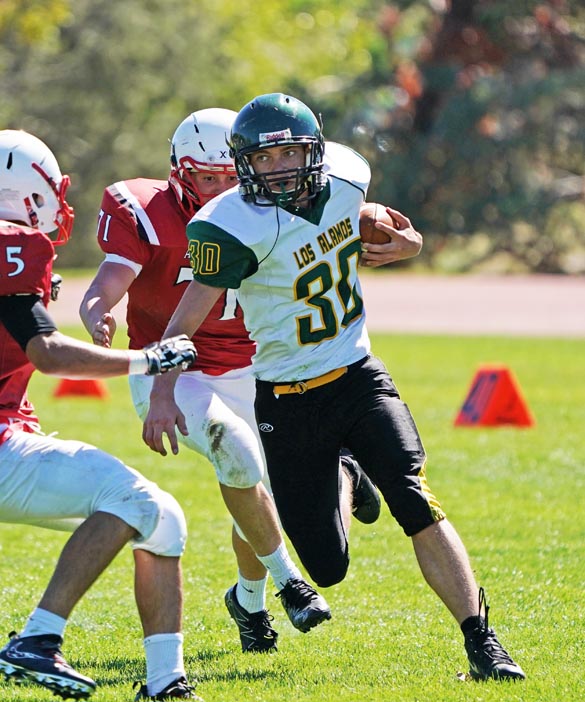 Leander Murphy broke tackle after tackle and ran for a 48-yard touchdown. Photo by John McHale/ladailypost.com 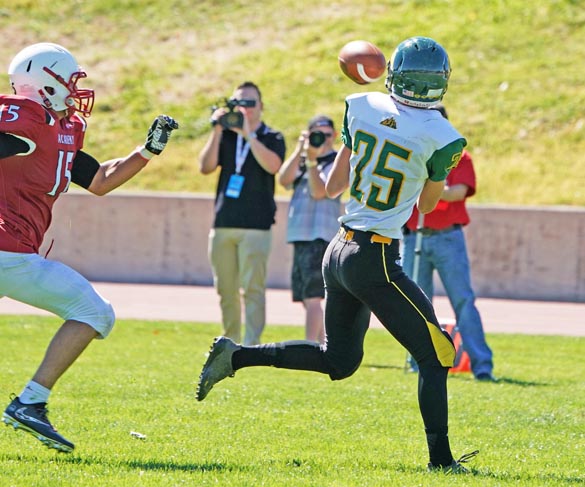