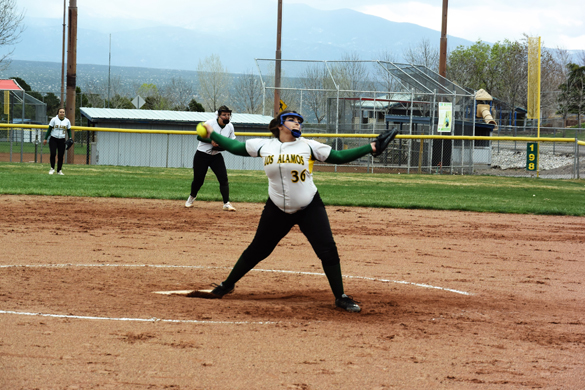 Reyna Lucero was the winning pitcher in the Lady Hilltoppers 10-7 victory over Albuquerque Academy in the second game of a doubleheader April 1 at Overlook Park in White Rock.​ Photo by George Morse/ladailypost.com

The weather was cold, windy and rainy Saturday in New Mexico. Track and field meets were canceled, as well as a scheduled doubleheader between the Los Alamos High School baseball team and Albuquerque Academy. Despite the weather, the Los Alamos softball team braved the elements and played a doubleheader against Academy at Overlook Park in White Rock. The Lady Hilltoppers swept the Lady Chargers 10-9, 10-7 to improve to 3-0 in District 2-5A.

The first game was exciting and went to extra innings before Los Alamos pulled out the victory. The Lady Chargers took a 2-0 lead in the top of the first inning. Los Alamos answered with one run in the bottom of the first inning on a single by Alicia Gonzales and a triple by Taylor Collins to make the score 2-1. Los Alamos took a 5-2 lead, scoring four runs in the bottom of the second inning on five singles and a batter hit by a pitch. The Lady Hilltoppers added another run in the fourth inning to lead 6-2 going into the fifth inning

Academy came back with two runs in the fifth inning highlighted by an over-the-fence solo home run by Hannah Heronimus. That made the score 6-4 in favor of Los Alamos. The Lady Chargers took the lead in the sixth inning, scoring four runs. Once again, it was Heronimus who had the big hit, driving in two runs with a double. She later scored on a single by Alix Hamon.

Down 8-6 after the Chargers’ rally, Los Alamos came back to tie the score with a pair of runs in the bottom of the sixth inning, with Gonzales and Collins delivering run-scoring base hits. After a scoreless seventh inning, the game went into extra innings that would be played under international tie-breaker rules. Each team would begin the inning with a runner at second base.

In the second game, Los Alamos may have benefited from the bad weather. The Lady Hilltoppers had another big second inning, scoring six runs to take a 7-3 lead. Los Alamos added two runs in the third inning to extend their lead to 9-3. Just like the previous game, Academy seemed to wake up in the fifth inning, scoring four runs to make the score 9-7. Los Alamos was batting in the bottom of the fifth inning and had already scored a run when the umpire called the game as a cold rain was falling and threatening to change over to snow. Because the Chargers had batted in the fifth inning, the game was official and would be recorded as a 10-7 win for the Lady Hilltoppers.

Savana Luster was the winning pitcher in the first game for Los Alamos. Reyna Lucero started the second game for the Hilltoppers and got the victory, with Luster coming in to pitch in the seventh inning to pick up the save.

“This is a young team and they’re still learning,” Los Alamos Coach Randy Burditt, in his first year, said. “They’re a unit. They’re playing together as a team.” 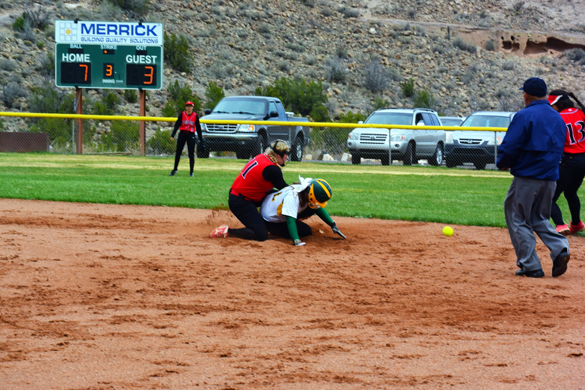 Lauren Harris stole second base for the Lady Hilltoppers against Albuqereque Academy.​ Photo by George Morse/ladailypost.com 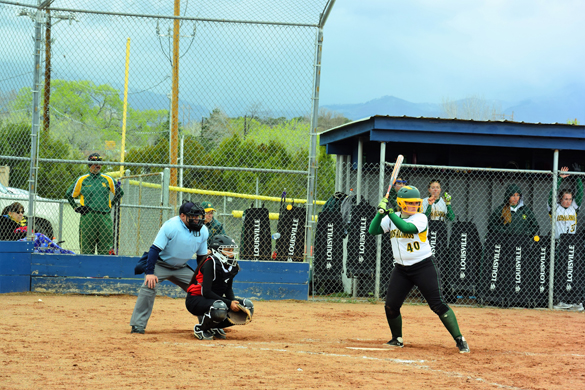 Claire Bluhm had a pair of hits against Academy in the second game of a doubleheader. The Lady Hilltoppers swept Academy 10-9 (9 innings) and 10-7 April 1 in White Rock​. Photo by George Morse/ladailypost.com