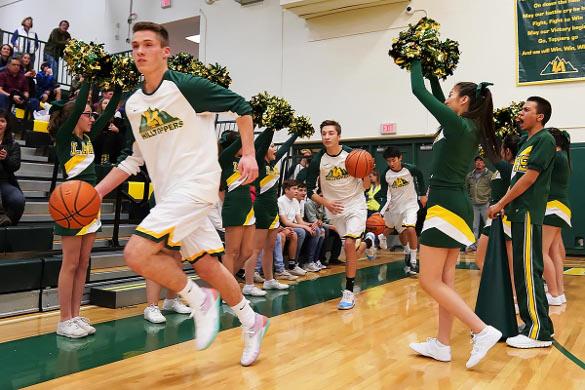 The Topper Boys Basketball team takes the home court in Griffith Gymnasium Thursday for their season opener against the St. Pius Sartans. The Sartans have been a thorn in the side of the Toppers for many seasons and this night was no different. While the Toppers were within striking distance through the night, they were never able to pull ahead for the win and lost the contest 42-51. Photo by John McHale/ladailypost.com

The Los Alamos High School boys basketball team trailed by just two points 23-21 at halftime against the St. Pius X High School Sartans. A rough start to the third quarter and an 8-0 run by the Sartans gave St. Pius a 31-21 lead. Los Alamos whittled the lead down to four points in the fourth quarter, but the Sartans held on for a 51-42 victory in the Hilltoppers opening game of the season Thursday in Los Alamos.

“We did not start strong in the third quarter,” Los Alamos Coach Mike Kluk said. ‘We struggled on offense and we know that. We only return two players with any varsity experience.”

The Hilltoppers lost much of last year’s offensive firepower after graduating seven seniors and had trouble running an offense against a seasoned St. Pius team. Los Alamos did not have an answer to the Sartans’ Zach Kolkmeyer, who led all scorers with 28 points. The 6-foot 3-inch senior did most of his damage inside.

St. Pius got off to a good start and took a 6-0 lead after two baskets by Kolkmeyer and an open layup by Jonah Arnett The Sartans stayed in front throughout the entire first quarter and led 14-8 going into the second quarter.

Los Alamos rallied behind a pressing defense and put together a 6-0 run that ended with a basket by Brian Irwin that tied the score 14-14 in the second quarter. Kolkmeyer broke the tie with an old-fashioned, three-point play and the Sartans took a 19-14 lead. The Hilltoppers answered and Irwin’s three-pointer tied the score at 19-19. After a Sartan free throw, a 10-foot jumper by Gabe Holsinger gave the Hilltoppers their first and only lead of the game 21-20 at 1:59 of the second quarter. Again, it was Kolkmeyer who came through for St. Pius. He drained a three-pointer from the top of the key that gave St. Pius a 23-21 lead at halftime.

The Sartans were leading 41-34 when St. Pius’ Joeden McConnell hit the deck hard after being fouled on a three-point attempt. He subsequently missed all three of his free throws. Matt Owen then hit a three-pointer to make the score 41-37 with time still left for the Hilltoppers to come back. Once again, it was Kolkmeyer who gave the Sartans a little more breathing room as he scored St. Pius’ next six points to give St. Pius a 47-39 lead. As time was running out on the Hilltoppers, it was Kolkmeyer who put the final nail in the coffin. He got behind Los Alamos’ pressing defense and was all alone for an easy layup for a final score of 51-42 in the Sartans’ victory.

Matt Owen led Los Alamos with 14 points. Irwin had 12 points for the Hilltoppers. Los Alamos hurt itself at the free-throw line, sinking just 3-of-11 from the line. Kolkmeyer was the only Sartan to score in double figures.

Despite the loss, Coach Kluk was encouraged by his team’s staying in the game despite the physical play of the Sartans. The 10-point lead at the beginning of the third quarter was the Sartans’ largest of the game and Los Alamos never let St. Pius pull away.

“The mistakes we made, the problems we had were not due to lack of effort against a good Pius team,” he said. “We got back in it and got back in it.” 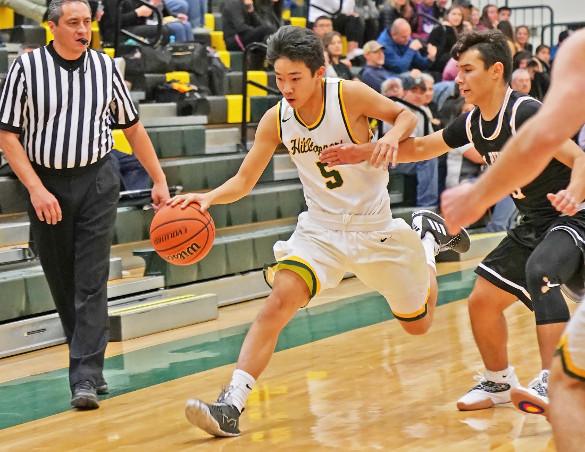 Sebastian Wood brings the ball down the right side of the court in a hurry in the first quarter. He had 5 points for the night. Photo by John McHale/ladailypost.com 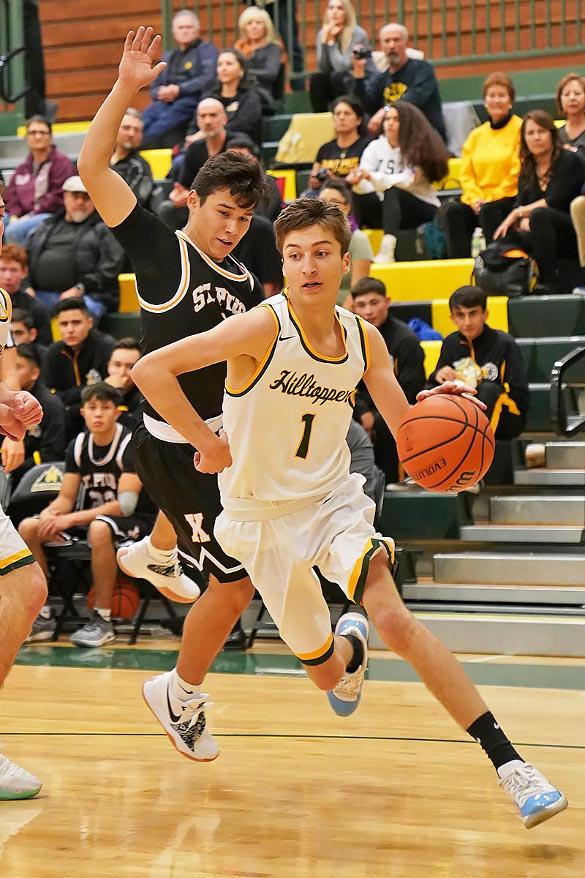 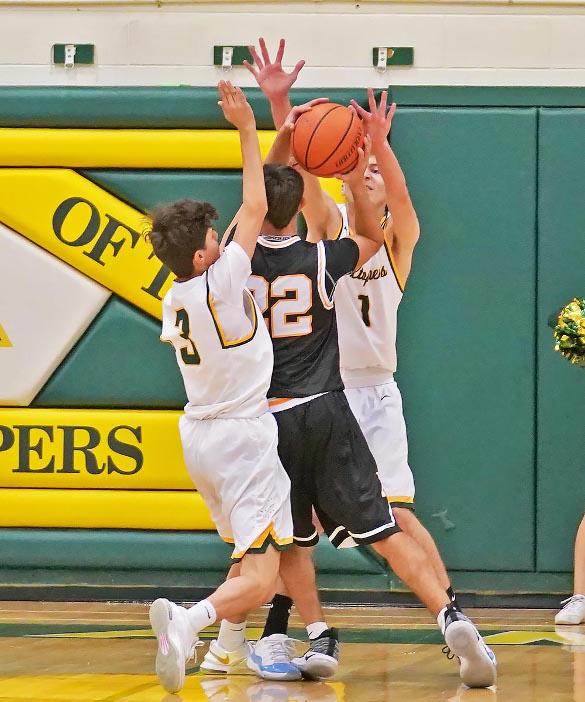 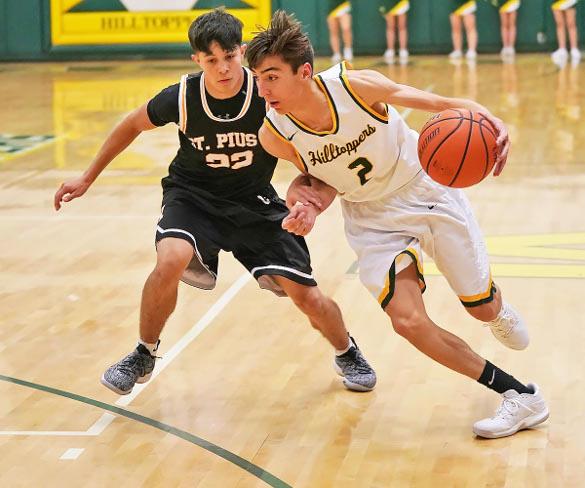 David Owen moves the ball past Martin Candelaria toward the Topper basket in the 1st quarter. Photo by John McHale/ladailypost.com 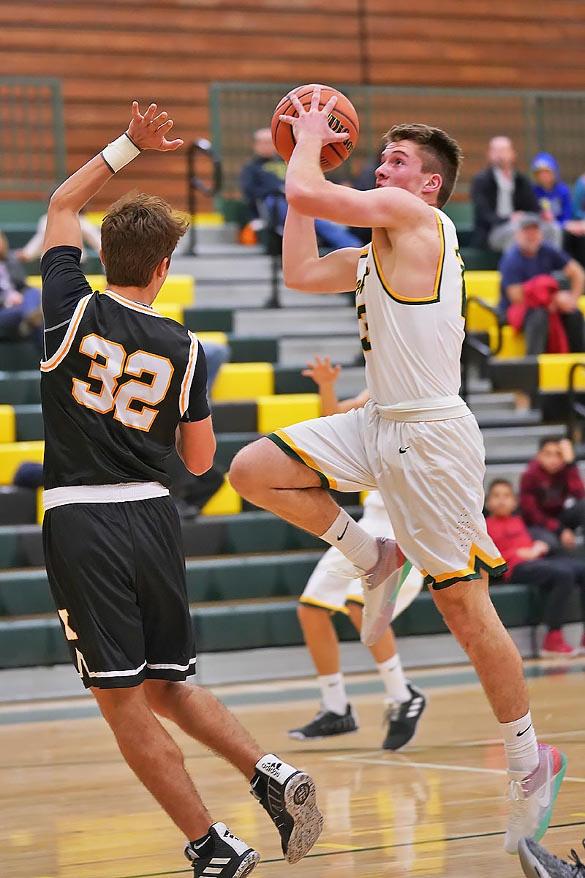 Brian Irwin goes up for a shot of one of the 10 points for the night. Photo by John McHale/ladailypost.com 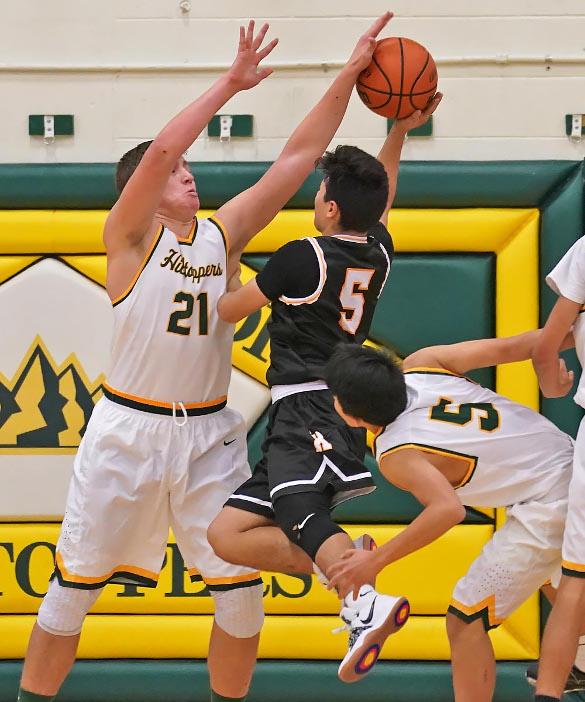 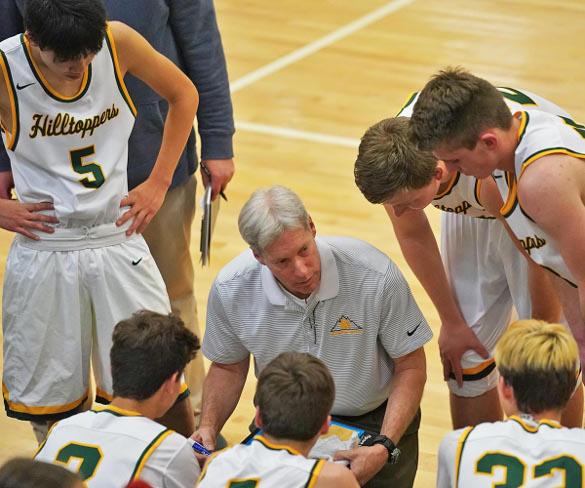 In the closing minutes of the game, head coach Mile Kluk calls the team together for a talk and a plan. Photo by John McHale/ladailypost.com